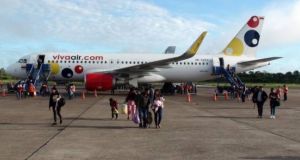 Irish airline owner Declan Ryan, son of Ryanair founder Tony Ryan, has added his voice to the chorus of industry executives who are opposed to leaving the middle seat on aircraft empty as a social distancing measure to counter the spread of Covid-19 on flights, describing the idea as “nonsense”.

“On a pure bio-safety level the area between seat A and seat C, with the middle seat being B, is very small. It’s probably three feet max so...to say that that’s going to save the health of people on board a flight is a bit of a nonsense,” Mr Ryan told the Wrong Way Colombia podcast, which is hosted by Irishman Brendan Corrigan.

Mr Ryan is executive chairman and founder of low cost airline Viva Air, which operates mostly domestic flights in Colombia and Peru. At present it has 16 aircraft in Colombia and four in Peru grounded, with only some repatriation flights being operated. Mr Ryan said on those flights passengers have had no problem with sitting in the middle seat “because everyone wants to get home”.

Mr Ryan said it was important that passengers checked their temperature before heading to an airport, and were also tested at airports. “We’re going to have the cleanest aircraft in Colombia, and we’re also looking at giving out hand wipes when people get on board.”

While predicting that the market for domestic flights would recover quicker than international services, he said it could be six to 12 months before its services “get back to normal”.

“Domestic tourism is going to be the first area to recover,” he said, adding that ticket prices might have to rise in the future, “particularly if we are mandated to have the middle seat empty”.

Of its 1,000 employees, Mr Ryan said only about 10 per cent were currently at work, with staff agreeing to take unpaid leave. It has also held talks with its aircraft lessors about deferring payments, and has sought a short-term loan from the Colombian government.

Colombia is currently under lockdown until May 25th, with airlines allowed to restart flying at the end of this month.