Dalalex chief under pressure, minimum wage impact and breaking up with your phone 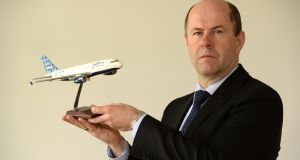 Datalex chief executive Aidan Brogan is set to come under pressure on Thursday.

Datalex chief executive Aidan Brogan is set to come under pressure as the Dublin-listed software provider to the travel industry holds a staff meeting on Thursday in a bid to shore up morale, after its shares slumped more than 75 per cent in the past two months in the wake of a profit warning. Joe Brennan reports.

The Government’s decision to raise the State’s minimum wage in 2016 reduced income inequality, reports Eoin Burke-Kennedy, but had little impact on overall household income, a new study has found.

Tech company iKey has teamed up with a Dublin school for a study that could lead to an age verification system that works by scanning a person’s eye, writes Ciara O’Brien.

Mergers and acquisitions activity involving Irish companies has declined sharply in recent months due to Brexit and other global trade worries, according to new research. Mark Paul reports.

Many Irish politicians have unsafe websites where any private information shared by the public could be intercepted, manipulated or stolen, according to a new study. Charlie Taylor has the details.

Cantillon ponders the deepening housing crisis, raises an eyebrow at the Central Bank and wonders what’s in a name at Paddy Power.

In her weekly column Karlin Lillington argues that when it comes to digital privacy our politicians need to be above board.

Kevin Roose tell us how he broke up with his smartphone.

Marie Boran finds out how to predict the future and Olive Keogh meets the brother behind the Gaslamp Distillery.

Can robots kill the call centre? Peter McGuire goes in search of answers while Dick Ahlstorm argues that our scientists deserve as much acclaim as our artists.

Systemic or coincidental? In this week’s Inside Business podcast, Ciarán speaks to Jack Horgan-Jones and Niamh Towey about their Irish Times investigation into widespread defects in boom-era apartment buildings.

1 Chris Johns: Economies may enjoy ‘roaring twenties’ if ministers learn lessons
2 Wet pub openings fuelled rise in Irish Covid infection rates – report
3 Basic income for all: Has the Covid crisis given us a new economic model?
4 How long can Government afford to keep State pension age at 66?
5 Profits jump threefold at LinkedIn’s Irish unit to $294.2m
6 Admission of mistake in Oxford vaccine dose raises doubts over reliability
7 White knights or loan book cannibals – what will happen at Ulster Bank?
8 Karlin Lillington: How I managed to cut my mobile phone bill by at least half
9 Oxford-AstraZeneca vaccine may be trialled again to prove results were ‘not a mistake’
10 Promontoria barred from pursuing doctor over Ulster Bank loan
Real news has value SUBSCRIBE