The world will be watching our dealings with multinationals

Net Results: Irish politicians need to be above board in the face of huge lobbying power 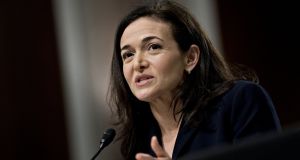 Sheryl Sandberg, chief operating officer of Facebook. Documents seen by the Observer reveal how she and others in Facebook lobbied then-taoiseach Enda Kenny and government representatives on GDPR, taxation policy and the pending appointment of a data protection commissioner. Photograph: Andrew Harrer/Bloomberg

Facebook’s past efforts to lobby the Irish government and influence policy and decision-making were again on show last week in a front page story in last Sunday’s Observer.

Based on documents seen by that paper (apparently, internal Facebook correspondence relevant to a current California court case), the story disclosed that Facebook chief operating officer Sheryl Sandberg considered the GDPR – then being drafted during Ireland’s 2013 EU presidency – a “critical” threat.

The documents reveal how she and others in Facebook lobbied then-taoiseach Enda Kenny and government representatives on GDPR, taxation policy and the pending appointment of a data protection commissioner to succeed Billy Hawkes, who was nearing retirement.

Much of this tale wasn’t news in Ireland, the gist having been revealed here in May 2017, via documents obtained by Irish journalists under Freedom of Information requests.

The Irish FOI material appears to be Irish-end correspondence for the same lobbying attempts referred to in the Observer story, with the latter providing a broader picture of events and particularly of Facebook’s internal presumptions of how successful its efforts were.

Despite indignation at the stories, lobbying politicians is not illegal, and US and other companies meet Irish leaders regularly and express opinions (St Paddy’s Day US visits, anyone?). Though distasteful, Facebook’s attempts shouldn’t scandalise – with one exception, to which I’ll return next week.

To put this another way: many welcomed the notable US corporate push here for marriage equality (and others felt otherwise). From the multinational view, marriage equality was a business positive from a number of angles, so they advocated for the referendum.

This was a lobbying effort and intervention by US multinationals in Irish policy outcomes. How you view that likely depends on whether you supported marriage equality.

Also, I’d take with a grain of salt Facebook’s confidence that, for example, Enda Kenny had promised to directly influence GDPR negotiations, which had the company stating internally that they saw him as a “friend of Facebook”, according to the Observer.

Anyone with even a fleeting familiarity with how Irish politicians deal with US companies or politicians will know there’s even a special Irish word for the relevant non-committal, flattering, smooth-talking, offence-avoiding blather: plamás.

Consequently, while it may be that Kenny, wrongly, staged a very inappropriate intervention directly with EU officials to try to weaken GDPR, I’d want stronger evidence than claims by Facebook minions – who no doubt wished themselves to be seen to have effectively lobbied an Irish taoiseach – that he did their bidding.

Actually, both the Observer and earlier Irish coverage seem somewhat vague in their understanding of GDPR and what actually happened with it during that Irish presidency. For example, the Irish story implies that having a “one-stop shop” for regulation and handling complaints – meaning the Irish regulator would oversee most tech multinationals – was a lobbying goal that Facebook “won”.

But the one-stop shop was one of the best-known, critical elements of GDPR from the get-go, when it was first proposed by then EU commissioner for justice Viviane Reding (whom the Observer refers to rightly as GDPR’s leading “architect”). The one-stop shop appealed to all companies, large or small, in the US or within the EU because, until then, they struggled to comply – at significant cost, with separate legal jurisdictions in every EU country.

And it wouldn’t seem Facebook’s lobbying efforts (or even perhaps Kenny’s) had much lasting influence on that GDPR draft, or the final regulation.

I interviewed the no-nonsense former journalist Reding in 2013 at the conclusion of that presidency when she noted general satisfaction with where the draft stood, while also pointing out it still had a negotiating journey ahead (during which EU parliamentarians ultimately would toughen the draft further).

She told me then: “So far, I have seen that, on the big elements that are in the text, there has not been [any] big change. The territorial scope, the one-stop shop [where companies have consistent, cross-EU legislation], the right to be forgotten, however you define it in the end, and the question that what is important is that you have to give a prior consent.”

Ireland, incidentally, now has some of the toughest (and widely praised) lobbying transparency laws in Europe. However, these came into effect after the activities disclosed in the Irish and British Facebook stories.

The most worrying aspect of the Observer piece was the evidence that Facebook tried to influence the appointment of the Irish data regulator. That’s a topic I will return to next week.

Meanwhile, this important and revealing Observer piece, and its predecessor coverage in Ireland from 2017, do carry a vital message. Ireland now has a powerful base of US multinationals here, many of them dealing with vast quantities of sensitive data daily from citizens all over the world.

Irish policies, and the activities of its politicians and regulators on the taxation, data protection, privacy and business front have global impact. Thus, Ireland’s actions must be above board and beyond reproach, at a global level.