Does the automation of tasks mean some people will have to find a new way to work? 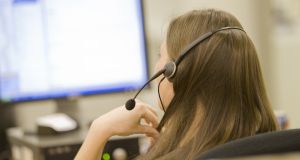 As artificial intelligence advances, it’s likely we’ll all be chatting with even more automated bots instead of humans

Young people have stopped picking up the phone to complain. Instead, they’re increasingly likely to do business over webchat, messenger or Twitter. As artificial intelligence advances, it’s likely we’ll all be chatting with even more automated and intelligent bots - even if they appear on the surface like a human customer service agent.

In February, the chief executive of Citigroup, Mike Corbat, suggested that “tens of thousands” of people who are currently working in their American bank centres are likely to be replaced by machines. A few days later, a report from two economists at University College Cork suggested that two in five Irish jobs might be supplanted by AI, with administration and customer service roles at particular risk, although another economist later suggested that their report was “overstated” and “fear-inducing.”

So what’s the reality for contact centre workers? What jobs are at risk? Might some new roles be created, or will people have to find a new way to make a living?

Dorothy O’Byrne is managing director of the Customer Contact Management Association (CCMA), which represents contact centre management and encourages knowledge sharing and continuous professional development in the sector. “Customer service has evolved with new social media and digital channels,” she says. “Less calls are being handled and there is a lot of messaging, webchat and automation coming into contact centres. From our perspective, the industry is growing and thriving and the challenge is recruiting people. And as an industry, we embrace AI: it means that companies can do more in customer service, with the simpler, more transactional activities supported through tech and the higher value tasks handled by more skilled advisers. Our members see opportunities to upskill staff to handle more complex queries.”

O’Byrne says that their members are already using technology to engage with and understand their customers. “AI can do incredible things but you need to use data to establish patterns and knowledge, and this means we need people with data analysis skills. So the roles might change, and the operations might become more sophisticated but, even with the advances to date, we haven’t seen significant job losses in the industry - indeed we’re seeing more recruitment, particularly at eir.”

“Telecom Eireann (the precursor of eir) once employed 15,000 people but, the advent of better technologies and more sophisticated platforms, that fell to 3,000. Pay in the sector is typically quite modest and it’s usually considered to be entry-level work. It’s quite heavily managed and that can make conditions quite difficult if a centre isn’t well-run. Staff turnover can already be quite high. Automation can perhaps improve productivity and enhance the customer experience, but it can also lead to further micromanagement.”

Intercom, an Irish firm that provides large and small firms with software that allows them to better communicate with their customers, is one of the firms that is disrupting contact centres and reducing the need for staff. Des Traynor, Intercom’s co-founder and chief strategy officer, says that traditional firms such as Domino’s pizza are increasingly becoming internet businesses, while the movement of software firms like Adobe and entertainment companies like Spotify and Netflix into subscription models means that customer loyalty and relationships have become more important. “There’s no point in getting a customer who leaves after a month. We knew that our tools could unlock customer relationships and loyalty, and our core intuition since launching intercom in 2011 - that every business needs this - has proved correct.”

Younger customers in particular don’t really want to pick up a phone anymore and expect to do their business by webchat and text. “Bots are able to do and more,” says Traynor. “Things change: WhatsApp and text has disrupted voice calls and, indeed, tech-based chat - which didn’t exist ten years ago - has changed how we communicate. The old ‘call centre’ with people on headsets is changed: today, we see a more quiet room with people talking to customer via messaging.

“Tech changes jobs, but while the numbers working in agriculture fell from 50 to just two per cent, we didn’t see more unemployment, because new tech evolves jobs, it doesn’t kill them. ATMs meant more bank branches opened, the cost of business decreased, productivity rose and more jobs were created. And nobody’s calling for the abolition of cars as a way to bring back jobs in the horse and cart industry.”

Barry Aldworth, a senior media officer with AA Insurance, says that tech and AI are already deployed in both of their Irish contact centres - and becoming more important. “The AA app is often the only way in which an AA member will contact us to report their breakdown. It tells us where they are and what’s wrong, and we then have a mix of intelligent software and intelligent people to make sure we send the right resource. The customer can track us on the app in real time until we arrive. For our insurance, administration and customer service, we have technologies like web self-service, web-chat and web-bots. We see these becoming more important in the future but not directly instead of our contact centres. I suspect the mix will be different but right now and for the foreseeable future, we are hiring staff, not just for these roles but across the board.”

Humans still want to talk to other humans

Michael Madden, professor of computer science at NUI Galway and a principal investigator with the Insight Centre for Data Analytics, believes that humans still want to talk to other humans. “Empathy and comprehension are important for people, particularly if they’ve encountered a problem [with a product or service],” he says.

“Machines are still a far distance from replicating anything close to empathy or common sense. Tasks such as balance requests and transfers can be automated quite well but there are tasks that require common sense - such as picking up a mistake that leads to a transfer of €10,000 instead of €10 - which a machine is not going to pick up on. Computer systems can outperform humans in a clearly and crisply defined set of narrow fields, such as chess or Go, or reading handwritten digits to convey handwritten zipcodes to barcode. But they are nowhere near artificial general intelligence.

“Tasks get automated, not occupations. Our jobs are different from 15 years ago, but the predictions of mass unemployment or 20-hour working weeks have not come to pass; we are having this conversation at 7.45pm and are both working late. So I’m always skeptical of these claims.”

McArdle, however, says that change is inevitable and we need to prepare for it. “It’s hard to predict the extent of how jobs might be impacted, but automation has wiped out jobs and a lot of new jobs for younger workers are low-paid and cannot meet the rising costs of living. It means that we need properly funded lifelong learning so people who lose jobs can retrain, and good, decent employers who recognise collective bargaining rights.”

Crunching the numbers: AI and contact centres in Ireland

60,000: the estimated number of people working in contact centres and shared service in Ireland*

160: the number of staff working in the AA’s administration, customer service and insurance contact centre

750: the number of in-house customer care jobs that eir intends to fill

450: the approximate number working at the Insight Centre for Data Analytics, an initiative between researchers at DCU, UCD, NUI Galway and other institutions, funded to the tune of over 100m and with over 80 industry partners

600: the number of people employed by contact centre disruptor Intercom, including at least 200 in Ireland

*according to CCMA research