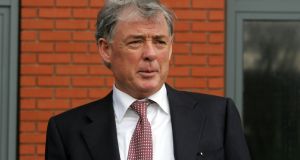 Seamus Ross of Menolly Homes: developer was one of the most active housebuilders in Dublin before the property crash. Photograph: Cyril Byrne

Dublin-listed Zamano, the former mobile technology company which sold its operating assets to management last year, is advancing talks to carry out a reverse takeover of a housebuilder linked to developer Seamus Ross.

In a stock exchange announcement this week, Zamano said talks between both parties, which were first disclosed in late April, are ongoing and that “preparation of the necessary transaction documentation is well advanced”. However, it said that no definitive agreement has been reached yet.

Zamano has not identified the other party involved in the talks. However, sources have confirmed Mr Ross, who was one of the most active housebuilders in Dublin before the property crash through his Menolly Homes group, is on the other side of the discussions.

A reverse takeover would allow the homebuilder to secure a stock exchange quotation. That would make it the third building firm to join the stock market since mid-2015, after an almost two-decade period during which Irish developers eschewed public equity markets.

The most recently-floated company, Glenveagh Properties, which raised €550 million in an initial public offering last October, revealed on Tuesday that its three key executives have received €22.5 million of shares in the company under a lucrative incentive plan tied to the deal.

Meanwhile, Zamano said that its proposed reverse takeover would allow existing shareholders to tender up to 100 per cent of their stock. “The potential transaction may proceed with or without the company raising new equity capital for deployment within the business, but this matter remains under active consideration,” it said.