Cantillon: NTMA chief says more weight to be given to balance sheet strength for contracts 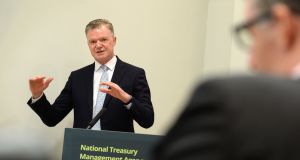 Work may have resumed on some of the Irish projects caught up in the collapse earlier this year of British construction group Carillion, but the long-term fallout from the debacle is that public-private partnerships projects are going to cost more in future.

That’s the view of the head of the National Treasury Management Agency (NTMA), as he used the launch on Monday of the agency’s annual report to wax lyrical on all manner of risks facing the State – from not selling bank shares before another stock-market crash to the threat of international bond investors becoming more wary of Ireland’s €200 billion-plus debt pile in the event of a bond-market shock.

Happily, the three most advanced schools, Loreto College in Wexford, Coláiste Ráithín in Bray and Ravenswell Primary School in Bray will be completed by the end of August. But the three other buildings – Tyndall College in Carlow, Carlow Institute of Further Education, and Eureka Secondary School in Kells – are unlikely to be finished until the end of the year.

“It seems clear that Carillion won a lot of contracts [internationally] on price – and price has a very high weighting in nearly all public procurement contracts,” Mr O’Kelly said.

In future, however, officials seeking tenders for PPP contracts will have to place more emphasis on the balance-sheet strength of companies on the other side of the deal, according to Mr O’Kelly.

“It could mean – and is likely to mean – that the price of all procurement and construction for those kinds of projects is likely to rise,” said O’Kelly, “and that could be the consequence in the medium term.”