Archive, September 2016: Justin Comiskey and Eoin Redmond, site manager for Walls Construction at the Project Wave development in Dublin’s docklands, climb one of the tallest cranes in the city as the recovery in construction continues. Drone footage: James Flood, JCF Drones 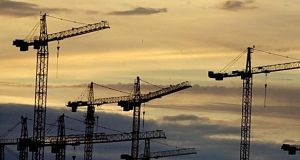 Trade unions Siptu and Unite have been in dispute as to which should represent crane operators. Photograph: The Irish Times

The trade unions Siptu and Unite have reached an agreement on a long-running dispute over who should represent crane operators in the construction sector.

The move follows a row last year in which Siptu complained that Unite had taken into its membership a number of crane operators who traditionally had come within its sphere of influence.

This complaint over alleged poaching of crane operators was upheld by a disputes committee of the Irish Congress of Trade Unions last summer.

Under the deal reached between Siptu general secretary Joe O’Flynn and Unite leader Len McCluskey, a senior official in the Irish Congress of Trade Unions will validate the number of crane operators who are members of each union and those who are members of both.

Siptu and Unite agreed – as part of the new deal – to the principle of “what we have, we hold” for those who were members of one of the unions.

However, when the assessment of the numbers of dual members who are in both unions is completed, the deal calls for the crane operators concerned to be sent – simultaneously from both organisations – a letter asking them to select the union of their choice.

Both unions will then seek a legally binding registered employment agreement with employers governing terms and conditions for crane operators by August 31st next.

In relation to representation of general operatives within the construction sector the Siptu-Unite agreement notes that there “does not appear to be any easy solution”.

The two unions are to ask former chairman of the Labour Court Kevin Duffy to examine all the issues involved and make recommendations to both organisations.

Pandemic pushes holiday company TUI to €1.1bn quarterly loss 17:35
Covid-19 puts end to hugs and kisses on RTÉ’s First Dates 17:25
Central Bank has sold off 70% of IBRC-linked bonds 16:56
Close to 300 Greencore staff test positive for Covid in Northampton 16:32
Brown Thomas and Arnotts to cut 15% of jobs due to coronavirus crisis 16:00

1 Brown Thomas and Arnotts to cut 15% of jobs due to coronavirus crisis
2 Close to 300 Greencore staff test positive for Covid in Northampton
3 47,000 homes need to be built each year to solve housing crisis, report says
4 It was business, it was personal: the Redstones’ father-daughter feud
5 Jervis shopping centre takes major tenants to court over rent disputes
6 MSD buys Takeda biologics plant in Dunboyne
7 Covid-19 puts end to hugs and kisses on RTÉ’s First Dates
8 Aryzta’s move to replace chairman prompts takeover speculation
9 Nearly 30,000 could lose pandemic payment if they do not confirm eligibility
10 Hairdressing 7% more expensive in July as prices decline across economy
Real news has value SUBSCRIBE