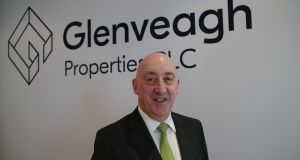 Bovale, the Irish builder founded by brothers Tom and Michael Bailey, is selling a site to quoted residential developer Glenveagh Properties in a deal thought to be worth more than €20 million.

Glenveagh announced the acquisition of four sites at last week’s annual general meeting for a total of €120 million, but did not name two of them as the deals had yet to complete and were subject to confidentiality agreements.

The larger of the two is understood to be a site in Kilcock, Co Kildare, which has the capacity for 400 new homes, that Glenveagh has bought from Bovale Developments.

Dubbed “Project Bill”, Glenveagh said in its agm announcement that the exact price was commercially sensitive but was more than €20 million. The deal is expected to go through before the end of September.

The company said that Project Bill was located in the Greater Dublin Area, a description that takes in parts of counties Kildare, Meath and Wicklow, which have relatively easy road and public transport links to the capital.

Glenveagh has spent €404 million buying sites for residential building. Last week it said that it was buying a 4.6 hectare property in Cork’s docklands with the capacity for 1,000 homes for more than €15 million.

The company is also purchasing a site in Castleforbes on Dublin’s docks that can accommodate 650 dwellings for €60 million. Glenveagh is spending €9 million on a fourth site that is also unnamed.

Led by chief executive Justin Bickle, Glenveagh floated in Dublin and London in October with the aim of buying land to build and sell new homes, mainly to buyers looking to get on the property ladder for the first time.

Bovale originally bought the Kilcock site, which is in the centre of the Co Kildare town, from rival developer Séan Dunne.

In 2013, the High Court disqualified both Bailey brothers from acting as company directors for seven years after they had been found guilty of tax fraud over two years to the end of June 1998.

This does not bar them from being shareholders. Bovale Developments most recent annual return names Michael Bailey as the owner of its 100 shares. The directors are Yvonne Bailey, Teresa Bailey, Anne Gleeson and Colin Creedon.