Figures, however, point to pick-up in single dwelling completions 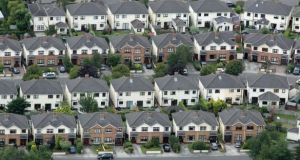 The latest Residential Property Price Index from the CSO suggests prices nationally fell by 0.6% and by a sharper 1.6% in Dublin, where supply pressures are most acute.

The number of new homes completed in the third quarter fell by 9.4 per cent as the slowdown in construction from Covid-19 continued to bite.

The figures from the Central Statistics Office (CSO) show there were 5,118 new dwellings completed between July and the end of September, compared to 5,652 in July-September 2019. The year-on-year reduction, however, was less pronounced than in the second quarter when the initial lockdown to curb the spread of the virus halted construction on most building sites.

Goodbody’s Dermot O’Leary said the third-quarter total represented “a strong rebound” from the 3,247 units completed in the second quarter. He also noted that completions in September were higher than a year earlier, pointing to momentum as the quarter progressed.

Goodbody is forecasting 19,500 home completions in 2020, which is sharply down on pre-Covid estimates but better than expected given the severity of the lockdown here.

“ Looking forward, the steeper decline in housing starts in the past six months suggests that the impact on output may linger into 2021 and beyond, due to a more cautious attitude of developers and funders in the market, a view that appears to be somewhat unfounded at this stage,” said Mr O’Leary.

The CSO’s figures show single-dwelling completions rose by 15.3 per cent to 1,467 in the third quarter, pointing to a modest resumption in activity.

The number of scheme dwellings – multiunit developments – completed, however, fell 13.1 per cent from 3,312. There was also a fall in apartment completions, which fell by 27.5 per cent to 774.

The latest Residential Property Price Index from the CSO suggests prices nationally fell by 0.6 per cent and by a sharper 1.6 per cent in Dublin, where supply pressures are most acute.

Dublin property prices fell by 1.6 per cent in the year to August as Covid-19 effectively put the brakes on the market.

The CSO data also point to a 40 per cent drop in the number of transactions in August compared with the same month last year.