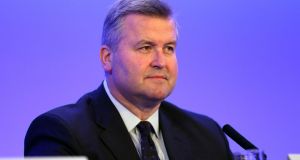 Shares in CRH jumped to a two-month high last month after it announced an agreement to buy Kansas-based Ash Grove Cement Company, which would better position the building materials giant to benefit from US president Donald Trump’s infrastructure plan.

In a statement on Friday, Ash Grove said it had received a “preliminary, non-binding competing proposal” from a third party to acquire Ash Grove at an “indicated enterprise value” of $3.7 billion to $3.8 billion.

“The board of directors of Ash Grove has determined that such proposal could reasonably be expected to result in a superior proposal and has determined to engage with such third party regarding its proposal,” it said.

Ash Grove said the “window shop period” with respect to the competing proposal had been extended until October 20th.

“There can be no assurance that such competing proposal will lead to a definitive offer or, if such an offer is made, that the board of directors will determine that such offer is superior to the transaction with CRH,” it said.

Ash Grove also announced that it will hold a special meeting on November 1st at which its stockholders will consider and vote on a proposal to adopt the previously announced agreement with CRH.

Ash Grove said its board of directors continues to recommend its stockholders vote in favour of the merger with CRH.

CRH said in a statement that it noted the announcement made by Ash Grove.

Davy Stockbrokers said the development was “perhaps not surprising” given Ash Grove’s attractive position in the US cement market.

“Ash Grove now has 15 days to evaluate the new proposal, the outcome of which will determine CRH’s response,” it said in a note.

“CRH’s options are now threefold: pursue its original proposal if Ash Grove continues to see it as a superior bid (there is no indication the new bid is a better proposal); match or better the new proposal, which the group clearly has the financial firepower to do; or walk away if the value is not there for shareholders.

“Given the group’s track record, shareholder value will be the key determinant of its next step.”

Ash Grove, which has operated eight cement plants in as many states under the same family for 135 years, shipped 8.2 million tons of cement last year.

It provides portland and masonry cements to construct highways, bridges, commercial and industrial complexes, single- and multi-family homes, and other important structures.