Ires shares fall 4% as it loses planning appeal in Sandyford

Development fails to comply with guidelines for residential areas, An Bord Pleanála says 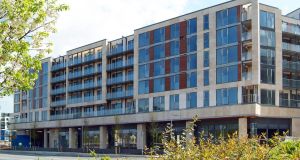 Rockbrook in Sandyford where Ires Reit has been refused permission for 492 apartments.

Property group Ires Reit has lost its appeal against a decision refusing it permission to build some 450 apartments in an area in Dublin with high demand for new homes, sending shares in the property group down. Ires Reit is now expected to submit new scaled back plans for the development of 350-400 units at the site.

Stock market-listed Ires recently appealed Dún Laoghaire-Rathdown County Council’s decision to refuse it permission to build 452 apartments at Rockbrook, Sandyford, in south Dublin. Ires had originally applied to develop 492 units on the site, but this was scaled back due to concerns about height.

An Bord Pleanála refused the appeal on Monday, saying the proposal was “contrary to the statutory development plan for the area” and to its sustainable development.

The planning appeals board’s ruling also states that the development would not comply with Government guidelines set out in a 2009 document, Sustainable Residential Development in Urban Areas, which are meant to safeguard residents’ quality of life.

In a note to clients, Colm Lauder, a real-estate analyst with stockbroker Goodbody, said the refusal of the appeal worsened the delay in the development of new homes in Dublin.

“The decision appears to be inconsistent with the council-approved local area development plan for Sandyford, and appears in direct conflict with recently articulated Government views,” he said.

Mr Lauder said submitting a new planning application could mean a delay of at least six months for Ires. He has forecast that the project could add more than €9 million to the Ires’s rent roll.

Davy Stockbrokers expects the property group will now submit new plans for the site, scaled back towards 350-400 units, noting that Ire Reit has put in place a secondary design team for this purpose. It’s likely that the new application will reduce the height of the apartment blocks towards 10-11 storeys each.

“Overall, we view this as a minor setback for the company but we expect the new plan to be successful,” Davy said in a note.

Demand for homes in the area remains strong. Mr Lauder said there were just 20 properties available to rent in Sandyford at an average of €2,455 each.

Ires Reit, which stands for Irish Residential Real Estate Investment Trust, did not comment on the decision.

It recently emerged that the Department of Housing was not happy with Dún Laoghaire-Rathdown’s decision to cap the number of new homes that can be built in the core areas of Sandyford at 1,300.

1 US threatens retaliation against EU over proposed carbon tax
2 Money matters: ‘My father embarrassed us with his haggling’
3 Comcast acquires Irish cloud-based telco Blueface
4 High costs and low returns will fuel nursing home shortage - CBRE
5 Firm sues Trinity College over contract for managing visitors
6 Ryanair to pay portion of Peter Bellew’s legal costs, court rules
7 Pilita Clark: When a rude boss keeps you waiting, why not walk out?
8 How to . . . move (almost) everything to your new phone
9 Higher costs result in steep decline in profits at Parc Aviation
10 Airbus poised for deal with regulators to settle corruption probes
Real news has value SUBSCRIBE