CRH said to be near acquisition of US cement mixer Suwannee

Deal, which may value Suwannee at $750m, could be announced this week 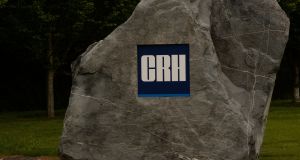 The purchase of Suwannee will further focus CRH on growth in North America, where it already bills itself as the region’s largest building-materials company

Irish building materials group CRH is nearing an agreement to acquire Florida-based cement company Suwannee American Cement from Votorantim Cimentos and Anderson Columbia to drive further growth in the US, it is understood.

The companies could announce an agreement as early as this week. The deal may value Suwannee at $750 million (€638m). While talks are advanced, they could still be delayed or fall apart, and the valuation could change. A representative for CRH declined to comment.

The planned acquisition follows a string of deals for CRH, which last month agreed to buy family-controlled Ash Grove Cement, also based in the US, in a $3.5 billion (€2.98bn) deal.

CRH, a serial buyer and seller of assets, announced in August the disposal of an interior building-products division for $2.63 billion (€2.24bn) to Beacon Roofing Supply.

The purchase of Suwannee will further focus CRH on growth in North America, where it already bills itself as the region’s largest building-materials company.

CRH shares are almost unchanged this year in London, giving it a market value of about £24 billion (€27.1bn).

CRH was seen as being one of the biggest potential gainers from an earlier pledge by US president Donald Trump of massive investment in infrastructure – a plan that Mr Trump has since thrown into question by telling lawmakers in a closed meeting last week that public-private partnerships were not the solution.

Even though a final infrastructure plan has yet to materialise, increased demand in the country for building materials like cement and aggregates is also underpinning the growth outlook of rivals including LafargeHolcim of Switzerland and Germany’s HeidelbergCement. – Bloomberg

1 Phil Hogan says EU ready to do ‘ambitious’ UK trade deal
2 Who are Ireland’s 17 billionaires?
3 MEPs reject Central Bank’s Gerry Cross for key banking role
4 Fantasy figures: Why make election promises you can’t afford to keep?
5 Are there annual limits on inheritances or gifts to a child?
6 Ireland has EU’s most progressive tax system, study finds
7 Cairn Homes gets permission for 426 homes near Greystones
8 ChangeX: building a tech platform for a better world
9 Are you a Monica, Joey or Chandler when it comes to your data privacy?
10 Davos: OECD confident on digital tax deal as France takes swipe at Ireland
Real news has value SUBSCRIBE