Glenveagh Properties plans to raise up to €550m through IPO

Irish housebuilder plans to build at least 1,000 new homes each year by 2020 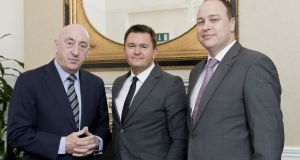 Glenveagh Properties, a new Irish housebuilder backed by US private equity firm Oaktree Capital, plans to raise up to €550 million through an initial public offering (IPO) by the middle of next week.

The company, created by combining property accumulated by Oaktree in Ireland in recent years and the assets of Maynooth-based builder Bridgedale, has about 1,700 “shovel-ready” units, and plans to be building at least 1,000 homes a year by 2020, it said on Monday.

It plans to build 2,000 new houses and apartments a year “in the longer term”.

The €550 million IPO target marks a third time the objective had been raised since the middle of the summer, with the company’s founding directors – executive chairman John Mulcahy, chief executive Justin Bickle, who is also chairman of a company used by Oaktree to hold Irish property bought in recent years, and chief operating officer Stephen Garvey – receiving strong support from potential investors in recent months. Mr Garvey is chief executive of Bridgedale.

Oaktree plans to place 14 sites into Glenveagh for a total €131.2 million, according to the IPO documents. Some €21 million of this money will go to construction group Sisk, which has a right to a percentage of sales from completed units at one of the sites, the flagship Marina Village residential scheme in Greystones in Co Wicklow that is under construction.

A further 12 sites, known as the Project Kells portfolio, will be bought, conditional on the flotation being successful, from a third party for €44.4 million.

A further site is being acquired from Mr Garvey and another party for a total of €4.4 million. Mr Garvey is also receiving €2.6 million of Glenveagh stock for the Bridgedale assets.

In addition, Glenveagh is in exclusive talks to buy one site in west Dublin and two in north Dublin for €34 million, while it is also looking at as much as €425 million of additional deals as it aims to maintain enough land on its books to develop over a five- to seven-year horizon.

Glenveagh said it believed all of the sites would be able to deliver about 3,020 homes in the greater Dublin area.

The deal comes a little over two years after Cairn Homes raised €440 million in the first IPO of an Irish homebuilder since the late 1990s. It comes at a time when house price inflation is running at more than 12 per cent in Ireland as supply continues to fall well short of demand.

“One of the structural weaknesses in the housing market in Ireland is the fragmented nature of the housebuilding sector and its lack of scale,” said Mr Mulcahy, a former senior executive with Nama and Jones Lang LaSalle in Ireland.

Glenveagh said that Ireland had experienced a “lost decade of housing provision” which has led to chronic undersupply estimated at circa 10,000 units across Ireland in 2016.

The three executive directors have been given so-called founder shares under an incentive scheme that allows the men to receive up to 20 per cent of total shareholder return over a five-year period.