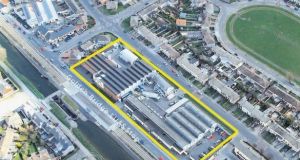 Part of the group, Durkan (Davitt Road) Ltd, applied to An Bord Pleanála for permission to build 265 apartments at the disused Dulux Paints factory site in Drimnagh, Dublin

Planners are set to allow developer Brian M Durkan & Co build 265 apartments for rent on the site of a disused paint factory under the fast-track housing scheme, in a move set to anger nearby residents.

Part of the group, Durkan (Davitt Road) Ltd, applied to An Bord Pleanála for permission to build 265 apartments at the disused Dulux Paints factory site in Drimnagh, Dublin under the fast-track scheme for large residential projects.

The board confirmed at the weekend that it has given the company permission to build the apartment blocks, which is likely to anger locals who have already branded the plan “entirely unacceptable”.

The board wrote to members of Drimnagh Residents’ Community Group saying that it had decided to grant permission for the development subject to a series of conditions.

As Brian M Durkan applied under the fast-track scheme, opponents cannot appeal the decision, but they can ask a High Court judge to review it. This involves the judge scrutinising whether the planning board followed its own procedures properly. Locals had not decided at the weekend if they would seek the review.

Durkan sought permission in January to build 265 one- and two-bedroom apartments in four blocks ranging from three to seven storeys, along with a café, shop and parking on the Dulux site.

The company is building the apartments to rent rather than sell. It has already discussed providing some of the homes to Dublin City Council for social housing, a condition that planning laws require.

Residents subsequently submitted formal “observations” to the board saying the plans were unacceptable for the area and highlighting a number of concerns, including the seven-storey height of one of the blocks.

They also raised fears about increased traffic, the impact on the area’s waste water system, noise, light pollution and the consequences for the nearby Grand Canal, which is a protected ecosystem.

Residents’ groups say they are not opposed to new development in the area, but argue that it has to be appropriate. They also maintain there was little consultation with them before the company submitted the plans.

The fast-track Strategic Housing Initiative allows developers of projects with 100 or more new homes to apply directly to An Bord Pleanála for planning permission without first going to local councils.

Before applying for permission under the scheme, they must go through a consultation process meant to address local planning issues.

Under the process, the board has 16 weeks to decide. Its ruling is subject only to judicial review. Documents sent to Drimnagh residents regarding the Dulux plan include details on their right to go to court.

Businessman Tony Durkan established Brian M Durkan & Co in the 1990s. His sons Brian and Anthony now run it. The family is one of three branches of Durkans who have been involved in building since the 1960s. However, none of their businesses are connected to each other.