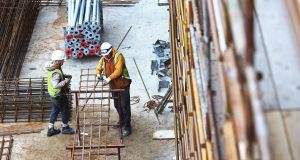 Having lost 43 per cent of its value in 2018, Cairn Homes’ share price recovery in first few months of this year was impressive – fuelled in no small part by management dangling the prospect of sizeable cash returns to investors over the coming years.

This week, the founding directors – Scottish accountant and serial entrepreneur Alan McIntosh, chief executive Michael Stanley and his brother Kevin Stanley – decided to get in first.

The trio raised €22.8 million by selling 17 million of shares they’d secured in the group since its 2015 flotation. Shares in Cairn, which had rallied by as much as 38 per cent from their late December lows, plunged by as much as 10 per cent on Wednesday, as investors fretted about why they were taking money off the table.

The shares are a result of the most eye-watering incentive scheme on the Iseq, which entitles the three men to up to 20 per cent of total shareholder returns (TSR) – including share price gains and dividends – over a period of seven years through a so-called founder share plan. It allows the three to convert 100 million of founder shares into ordinary stock over the period, subject to a 12.5 per cent TSR being achieved annually over the period.

More than 80 per cent of the founder shares had been converted into ordinary stock by the end of last summer – just three years in. The directors cashed in some of their chips in September 2017, selling 15.65 million shares at €1.70 for €26.6 million.

The latest placement comes almost six years into a sustained recovery by Irish house prices from their post-crisis lows – at a time when homeowners and experts alike are wondering which way the market is headed.

Analysts have largely played down the tepid increases, pointing out that banks find it harder to offer exemptions to the Central Bank’s loan-to-income and loan-to-value mortgage lending limits in the early part of the year.

“Given the wide disparity between supply (annual completions are running 40 per cent below the long-term average and circa 50 per cent below new household formation) and demand (a growing population, record employment and real earnings growth of 3 per cent year on year), we think this soft patch is a temporary blip as opposed to the start of a new dynamic in the housing market here,” Investec Ireland economist Philip O’Sullivan said in a note to clients.

Cairn, in fairness, has consistently said that its business model is not based around house price inflation and that new home prices have trailed the market in recent years.

“I don’t think our shareholders want us to necessarily be overly greedy at this stage in our business, and I don’t think that’s the correct way to run our business,” Michael Stanley told analysts in March. “We are conscious that in order to hit our sales rates, we have to offer competitively priced product.”

Although Cairn managed to restrain its construction costs growth to 2.75 per cent last year and has fixed over 70 per cent of build costs for this year and next by offering subcontractors long-term work, the sector is facing increasing inflationary pressures, squeezing margins. Is it only a matter of time before this affects Cairn too?

A report published by global professional services firm Turner & Townsend this week said that Dublin is now the seventh most expensive place in the world to build and that construction costs – spanning the commercial and residential sectors – are set to rise by 7 per cent this year.

Investors who piled into Cairn’s 2015 IPO knew that McIntosh (who got involved with the Stanleys in 2014 when he helped them exit the National Asset Management Agency by refinancing debts against a 50-acre site in north Co Dublin at par) saw Cairn as a way to ride the recovery and was unlikely to remain involved in the long term.

The Scot has raised almost €26.7 million through the two stock placements within the past 20 months.

Having moved from an executive to a non-executive board position last September, his remaining 5 per cent – and any additional shares he receives under future founder-share conversions – is likely to be drip fed into the market at earliest opportunities, after lock-up periods expire, according to market observers.

Kevin Stanley is also seen as a natural seller, having quit as chief commercial officer of the group in recent months.

And while Michael Stanley’s sale of an initial batch of €4.47 million of stock in September 2017 was seen as well-earned and to be expected, the latest deal has raised eyebrows.

The timing is all the more odd when Cairn, having raised €720 million of equity since its 2015 initial public offering and holding enough land to build 15,000 homes, is predicted by analysts at Davy to return 35-55 cents per share to investors over the next three years. For context, the stock is currently trading at a little over €1.30.