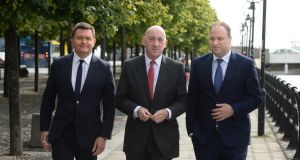 Chief executive Justin Bickle, a former senior official with US private equity firm Oaktree, which rolled some of its Irish land assets into Glenveagh in advance of its flotation in 2017, received €719,500 in compensation last year, including basic pay, cash bonuses and other benefits, according to the company’s annual report, published on Friday.

However, that excluded €9.965 million of stock he received in the housebuilder last August under a conversion of so-called founder shares into ordinary stock.

The key part of the incentive programme that was built into Glenveagh’s IPO entitles Mr Bickle, executive chairman John Mulcahy, and chief operating officer Stephen Garvey to convert 200 million founder shares into ordinary stock over a period of five years, subject to certain conditions. Top executives in fellow housebuilder Cairn Homes have benefitted from a similar plan that was tied to that company’s flotation in the middle of 2015.

Mr Mulcahy, a former chief executive and chairman of Jones Lang LaSalle Ireland and one-time head of portfolio management at the National Asset Management Agency (Nama), received €419,000 in compensation last year from Glenveagh. That’s in addition to €2.214 million of stock he received under the founder-shares conversion.

Glenveagh said last month that it generated €84 million in revenue last year on foot of selling 275 units. Its target had been 250.

The company has a landbank capable of facilitating a further 12,600 housing units and said that it was actively building on 14 sites during 2018 with more than 1,100 units under construction.

The three executives cannot sell any of the ordinary shares issued to them on conversion of founder stock for at least a year. Half of the stock are subject to a further one-year lock-up period.

The company posted a pre-tax loss of €3.56 million for the year ended December 31st, with central costs of €17.2 million.

Shares in Glenveagh have rallied almost 25 per cent so far this year to 88c, having being sold off sharply in the second half of 2018 following a badly-received placement of €213 million of additional shares and move by Oaktree to sell half its 16 per cent stake in the company in July, as well as general weakness across equity markets. Still, the shares continue to trade at a discount to their €1 IPO price.