Construction industry expected to take at least 12 months to recover 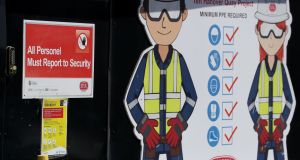 Covid-19 guidelines at the entrance to a building site in Dublin city centre. . Photo credit should read: Brian Lawless/PA Wire

Construction professionals expect it will take at least a year for the industry to rebound to pre-pandemic levels, as builders prepare to start reopening sites next week following a collapse in activity amid Covid-19 restrictions.

A Construction Industry of Ireland (CIF) survey of 360 participants in the sector in April found that 71 per cent are “very concerned” about the impact of the Covid-19 economic crisis, with two-thirds having being forced to lay off workers on at least a temporary basis.

Separately, Ulster Bank’s latest monthly gauge of construction activity saw its purchasing managers’ index (PMI) for the industry collapse to just 4.5 in April, well down on the reading of 28.9 in March and by far the lowest since the survey began in June 2000. A reading below 50 signals that activity has decreased from the previous month.

“Construction companies have seen 100,000 of their workers lose the jobs in the past month,” said CIF director general Tom Parlon.

“As the first sector to be allowed back to work, it’s critical that the construction industry can remobilise quickly so it can begin to benefit the wider economy. However, the pandemic has left a deep scar that our members think will take at least 12 months before they recover fully.”

“From cash flow issues and legal disputes to productivity challenges, the industry will need time to adjust and recover,” he said.

“Despite this, the construction industry has been preparing for a month and next week companies will be carrying out site safety assessments to “Covid proof” construction sites around the country to prepare for a gradual return to work. This will involve putting in place extra hygiene facilities, adding safety modifications on sites and carrying out essential maintenance.”

“The forward-looking elements of the PMI survey also pointed to extreme and widespread weakness in April,” he said. “Notably, 83.5 per cent of firms reported declines in incoming new business flows, with the collapse in actual and prospective activity in turn weighing on staffing levels last month.”

He said that the April index reading may prove to be the “nadir of the current crisis for Irish construction firms” as sites start to reopen from next week.