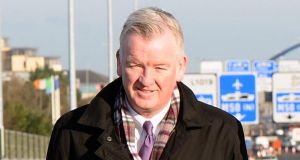 BAM Group chief executive Theo Cullinane. It is understood BAM remains in the race to complete a €100 million schools construction contract, despite the liquidation of its partner in the project, Sammon Construction. Photograph: Eric Luke

Builder BAM remains in the running to complete a stalled €100 million school building programme, despite the liquidation of its partner in the bid, Sammon Construction.

Sammon went into liquidation last week as uncertainty grew over whether its joint bid with BAM to win a contract to complete six schools left unfinished since January would succeed.

It is understood that BAM, which was leading the bid, remains in the race for the schools contract, despite the liquidation of its partner in the project, Sammon Construction Ireland Ltd, last week.

Other bidders include builders Sisk and JJ Rhatigan, while sources have suggested that overseas contractors may also be eyeing elements of the project.

BAM and Sammon were named publicly as joint bidders in April. BAM subsequently confirmed its involvement in the race.

However, it has refused to comment on the status of its bid since Sammon went into liquidation last week.

The project involves finishing the five schools and an institute of education in counties Carlow, Meath, Wexford and Wicklow, and managing them once work is complete.

Sources suggested that Sammon, the original subcontractor on the project, would finish the work, while BAM would take charge of the facilities management. However, neither side confirmed that to be the case.

Work on the schools halted in January following the collapse of British builder Carillion.

Fears are now growing that the buildings will not be finished on time for the new school year in September, when they were scheduled to be open. It was thought that work would restart on the sites early this month.

Inspired Spaces, a partnership of Carillion and Dutch Infrastructure Fund (DIF) won the original contract to build the schools and manage them.

DIF says it has received various bids to finish construction and is considering its options.

Inspired Spaces originally hired another Carillion subsidiary to build the schools. That company in turn hired Sammon to do the actual work.

Carillion’s collapse halted work on the schools. This starved Sammon of vital cashflow and forced it to ask the High Court in April to appoint an examiner and give it protection from creditors.

Possible investors in Sammon, including developer PJ McGrath of the McGrath group, were interested in backing a rescue plan for the company only if its joint bid with BAM won the contract to complete the schools.

However, as uncertainty grew over its prospects of winning that contract, examiner Michael McAteer of Grant Thornton asked the High Court to wind up the company.

The National Development Finance Agency, which is overseeing the contract for the Department of Education, has warned the remaining parties involved that the schools must open in