Permission sought for 94 apartments on site measuring half a hectare

Residents in Donnybrook want property player Avestus Capital Partners to ditch an €80 million plan for more than 90 apartments in the area. 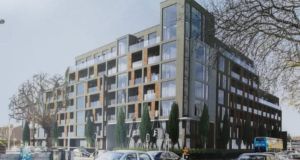 An image of the proposed €80 million apartment block in Donnybrook that has sparked complaints from local residents over the scale of the project.

Residents in Donnybrook want property player Avestus Capital Partners to ditch an €80 million plan for more than 90 apartments in the area.

Avestus is seeking permission from Dublin City Council to build 94 apartments on a site measuring less than half a hectare on Eglinton Road, a well-heeled suburb on the capital’s southside.

Residents are opposing the plan, worth an estimated €80 million, on the grounds that its height and the number of apartments exceed limits set by the local authority for the area.

Labour city councillor Dermot Lacey pointed out that Avestus wanted to demolish six houses and build up to seven storeys on a 0.38 hectare site. “It is too much and too high,” he said.

Cllr Lacey noted that city planners had told Avestus in consultations that the density of apartments in the proposed development was higher than the local area plan allowed.

“Residents are overwhelmingly against this, I have not heard anybody say that they favour it,” he said.

He estimated that 50-60 people from the area turned up to a recent public meeting in Bective Rangers rugby club to discuss the plans. “That would be a very, very high turnout for that area,” he added.

Cllr Lacey criticised the quality of the presentation on its plans that Avestus gave to the meeting.

He argued that Avestus should simply redraw its proposals for the site into something more suited to the area rather than going through the planning and appeal process.

Objectors say the area’s infrastructure, roads, water supply and sewage services would be unlikely to cope with a development on the scale planned by Avestus.

They also warn that it would lead to the destruction of the area’s character. Most of the homes in the area date to the 19th and early 20th centuries. The development would reduce property values in the area by 20 per cent, objectors contend.

No comment was available from Avestus on its plan for the site. Avestus is led by principal and chief executive Olan Cremin. Along with US-based Magnetar Capital, the company bought six adjacent homes in the Dublin 4 suburb late last year.

The two companies paid more than €6 million assembling the site. They bought the first three houses for €700,000, €1.2 million and €1.4 million, and paid €3.25 million for the remaining properties.

The development will reach seven storeys at some points, reducing to six and four at others. The plans also provide for a cafe, lounge and residents’ meeting area.

Avestus submitted the plans through a business called the Donnybrook Partnership. Avestus invests in and develops properties in Ireland, where it is involved in commercial and residential property.

Magnetar Capital is a US investment fund that manages more than $13 billion in assets.

Avestus also has a presence in eastern European countries such as Poland, the Czech Republic and Bulgaria, where it owns shopping malls and offices.