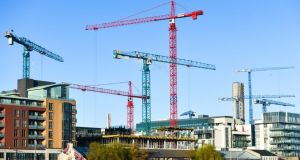 Activity in the construction sector has grown in each of the last 57 months, according to Ulster Bank. Photograph: Artur Widak/NurPhoto via Getty Images

State infrastructure building slowed last month as construction of homes and offices rocketed ahead, a survey published on Monday shows.

The index, which follows the sector’s performance every month, hit 61.8 in May indicating a sharp rate of growth.

The PMI takes 50 as its benchmark. Any reading above that figure indicates the industry expanded on the previous month, while any result below that number indicates that it shrank.

May’s reading was ahead of the 60.7 recorded in April, signalling that the industry’s momentum increased last month.

However, the result for civil engineering – which consists mainly of State-funded projects such as roads, schools and other infrastructure – fell to 48.8 in May, meaning activity in this area declined last month.

Ulster Bank noted that the pace of growth had quickened for the second month running and was the fastest for a year.

According to the bank, activity has now grown in each of the last 57 months, indicating that construction’s recovery now stretches back to 2013.

Simon Barry, Ulster Bank chief economist for the Republic, pointed out that the index’s headline reading had increased for the second month in a row.

“Commercial construction recorded another acceleration in activity which took the commercial PMI to its highest level in nearly two years, in the process leaving commercial as the strongest category last month,” he said.

“There was also a sharp rise in residential activity which took the housing PMI to its highest level in a year.

“The results for civil engineering were not as favourable, with activity here registering a decline in May, ending a five-month run of expansion,” Mr Barry added.

Commercial building, mostly offices, rose to 65.6, while housing climbed to 65.2.

Employment grew on the back of the expansion, although at a slightly slower rate than in May.

There are growing fears that construction will shortly face a skills squeeze, particularly as the number of apprentices joining the industry fell sharply over the last decade.

New orders, an indicator of future work, continued to grow, hitting a 12-month high, according to the index.

Mr Barry noted that this boosted participants’ hopes for the coming months. “Survey respondents remained strongly optimistic about the year ahead with a strong pipeline of new activity and improving economic conditions cited as important sources of support,” he said.

New business orders in general increased for the 19th month in a row and at the fastest pace since since February, outperforming the UK average.

The fastest jump in new business was in the service sector which, according to Ulster Bank, recorded a “marked expansion”.