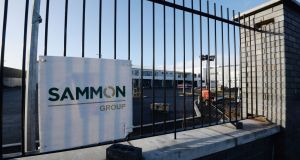 It’s a cruel irony for Sammon Construction Ireland’s 200 workers that a company which survived the building industry’s worst recession in years goes under when the sector is firmly back on the up.

In a move that was anything but inspired, that company hired another Carillion subsidiary to build the schools. This in turn recruited Sammon as a sub-contractor to do the work. Once the Carillion tree fell in January, the branch went with it, pulling Sammon down also.

Two lenders, Germany’s Helaba and Tokyo Mitsubishi Bank, were funding the schools building project, but that stopped once Carillion went under, stalling construction and leaving Sammon without cash.

The net effect is that the failure of a British company has left the fate of six Irish schools in the hands of a Dutch fund and a German and Japanese bank. Presumably those deciding on finance to complete the work – however well informed they may be – would struggle to find the location of any of the six schools on a map.

This illustrates an issue for a country that needs to build lots of schools, homes, water treatment plants and whatever else: those with deep enough pockets to fund such construction projects are mostly outside this jurisdiction.

There is little we can do about this, particularly as Irish banks, still recovering from the recession, are not big backers of infrastructure. That is not a problem when things are going well, but when something goes wrong, it means decisions affecting schools in Wicklow or Carlow will be made by far-away people who may not regard these projects as much of a priority.