Seen and Heard: A round-up of the stories hitting the headlines 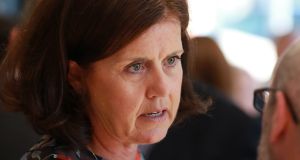 Chief executive of FBD Insurance Fiona Muldoon: the board has received the results of an independent investigation into corporate governance and human resources practices. Photograph: Nick Bradshaw

The National Treasury Management Agency (NTMA) and Nama will spend up to €175 million over 25 years renting a new headquarters in the Dublin docklands that had been on sale for €164 million, reports the Sunday Business Post.

The State agencies had looked at buying a building, but were told it was government policy to rent new headquarters instead of buying them, and the 10-storey building was instead bought by a German pension fund. The move has been criticised by members of the Dáil’s committee of public accounts.

The board of FBD Holdings received the results of an independent investigation into chief executive Fiona Muldoon last week, reports the Sunday Times. The investigation, undertaken by Boyce Shubotham of William Fry solicitors, looked at allegations made by a number of FBD executives about corporate governance and human resources practices at the company.

The conclusions are expected to clarify Muldoon’s position at FBD, where she has been chief executive since 2015.

The Government intends to announce the outcome of the National Broadband Plan (NBP) bid process on September 16th, the Sunday Independent understands. It insists the project remains on track despite the recent departure of electrical utility giant SSE from the shortlisted bidding consortium led by Enet.

The signing of a contract with Enet is expected to be followed by an announcement on September 16th, allowing construction work to begin on the rural broadband network in early 2019.

Dublin-based tech firm Enbio plans to add more than 80 jobs over the next five years on the back of its involvement with the European Space Agency (ESA), reports the Sunday Business Post.

Enbio, which also has a production facility in Clonmel, has developed a pigment known as SolarBlack using ground animal bone to help protect the ESA’s Solar Orbiter, a sun-observing satellite currently under development, from extreme heat.

Virgin Media-owned TV3 Group has told the Sunday Independent that RTÉ should address its existing cost base and services that they already operate at a deficit before “taking on any additional commitments” such as the planned RTÉ2 +1 channel.

RTÉ recently made a formal submission to the Department of Communications about such a channel, as well as an extension of the hours of the RTÉ1 +1 channel, which currently only operates from 7pm.

Apollo Global Management is in exclusive talks to buy the hotel group Tifco from Goldman Sachs, according to the Sunday Times.

The US private equity firm is believed to have beaten a rival bid from TPG Capital for Tifco, which is the second-largest hotel operator in the State behind Dalata. It owns 18 hotels, trading mostly as Crowne Plaza and Travelodge, and has 2,600 rooms in its portfolio.