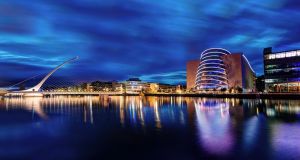 Dublin’s ranking puts it behind London, in third place, and Paris in 12th place. Berlin and Barcelona also rank higher than the Irish capital. New York topped the list, with the US’s Bay Area in second.

Dublin has ranked 34th on a list of 50 global cities based on their ability to attract women entrepreneurs.

The ranking was carried out by research firm IHS Markit and Dell, highlighting the barriers and opportunities for women, and launched at the ninth annual Dell Women Entrepreneur Network Summit.

Dublin’s ranking puts it behind London, in third place, and Paris in 12th place. Berlin and Barcelona also rank higher than the Irish capital. New York topped the list, with the US’s Bay Area in second.

The cities were ranked on five characteristics: capital, technology, talent, culture and markets.

Dell has also developed 10 city blueprints that show where a city can improve its ecosystem for women entrepreneurs.

“Women’s entrepreneurship rates rose globally by 13 per cent in 2017, reflecting broader momentum of increased female representation across the public and private sectors in many regions around the world,” said Karen Quintos, executive vice president and chief customer officer at Dell.

“However, access to capital and technology, as well as cultural and political barriers, continue to limit the success of women-owned businesses.”

Only two per cent of venture funding went to female founders in 2017, Dell said.

“According to extensive data and analysis, when barriers to women entrepreneurship are removed, there is a dramatic uplift in a city’s economic prospects,” said Cris Turner, vice president of government affairs at Dell.

“The WE city deep dives and blueprints offer insights on what cities on the list can learn from one-another and encourage political action to attract and support women entrepreneurs at the local level.”