Irish firm on standby as World Cup gets underway 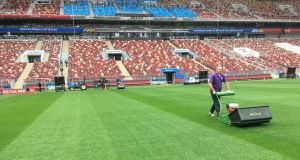 The SIS Pitches team at Luzhniki.

Irish company SIS Pitches is set to play a major role in the World Cup in Russia, with a team from the firm on standby to maintain the high-tech pitch at Luzhniki Stadium.

The pitch is made from a mix of grass and specifically designed yarnto create a reinforced turf system. Each pitch has 10 tonnes of yarn stitched in, with natural grass making up 95 per cent of the pitch.

Luzhniki, which will host the equivalent of full season of Premiership games in four weeks, is the only pitch that SIS Pitches will maintain; the others have already been handed over to stadium management.

“We will have 12 people at the pitch throughout the tournament, making sure that the surface is perfect before every game. They will then repair the pitch if any damage has been caused during the game.”

It is the most high-tech pitch ever used for a World Cup Final.

Along with the natural turf system, it alo implements a new aeration technology that allows it to be drained in seconds using a network of pipes under the pitch that forces air movement through the soil.

SIS Pitches was established in 2001 by Mr Mullan. Based in Sligo, the company supplies sports surfaces for schools, colleges, universities, sports clubs and local authorities around the world. It employs 341 people worldwide, including 56 in Russia.