Dublin suffers one of biggest declines nationally, down 26% on same period last year 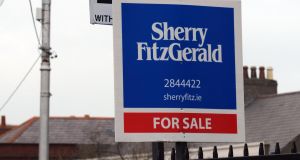 Sales of houses and apartments in Cork – the second-largest market – were down 20 per cent to 2,304. Photograph: Cyril Byrne

The impact of coronavirus restrictions has had a significant impact on the residential property market with sales of houses and apartments down 23 per cent in the first half of the year.

An analysis of the sales registered on the residential property price register shows about 5,800 fewer transactions in the first six months of this year compared with the same period in 2019.

A total of 19,662 sales took place between January and June, compared with 25,509 transactions during the corresponding period last year.

The number of property transactions in the first quarter was largely unchanged on the previous year but the slowdown was pronounced from April onwards due to the introduction of restrictions to combat the spread of the pandemic.

Average monthly sales between April and June last year were just under 4,600 but the figure decreased to just over 2,700 this year.

The property market in Dublin, which accounts for about a third of all sales nationally, suffered one of the biggest declines, with the number of transactions down 26 per cent.

The biggest drop was recorded in Louth, where the number of sales was down 36 per cent to 508.

Other counties where the level of transactions declined by more than 25 per cent were Kildare, Wexford, Kilkenny, Tipperary and Wicklow.

The smallest rate of decrease was recorded in Monaghan – which has the lowest level of transactions of any county. The number of sales there was down 5 per cent to 165.

Sales of houses and apartments in Cork – the second-largest market – were down 20 per cent to 2,304.

The price register, which is operated by the Property Services Regulatory Authority, shows the number of sales of new homes in the first half of 2020 was 3,407, compared with 4,667 in the corresponding period last year – a decrease of 27 per cent.

Sales of new houses and apartments accounted for 17 per cent of all residential property sales between January and June.

The figures show the total value of residential property sales in the first half of the year was down €1.36 billion to €6 billion – a decrease of 19 per cent.

The largest property sale so far this year was the purchase of a block of 197 rental apartments at Honeypark in Dún Laoghaire by Irish real estate investment firm Avestus Capital Partners for €114.4 million, excluding VAT.

The largest residential sale of a single home was the €8.5 million price recorded for Summerhill, a five-bedroom Victorian mansion with views over Dalkey Island.