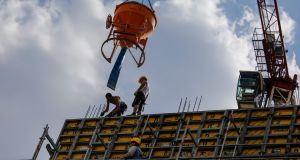 The delivery of high-quality, owner-occupied homes built – as they are now – efficiently by the private sector, should be encouraged and facilitated. Photograph: David Gannon/AFP via Getty Images

The national response to the Covid-19 emergency shows how a small, close-knit country like Ireland can lead the world in dealing with a severe crisis. By coming together, and staying apart, and by applying joined-up thinking to a complex problem, we flattened the curve, avoided an ICU disaster and saved lives.

It is time we took the same approach to some of the other severe problems we face, such as the housing crisis.

In Ireland in 2020, we have more than 440,000 households earning between €50,000 and €95,000. Incredibly, these households are part of a locked-out generation who, it is deemed, do not earn enough to buy their own home, and yet are often saddled with astronomically high monthly rents.

What is more, those high rents do not allow these people to save money for a deposit, even if they could qualify for a mortgage.

This is a social disaster and represents a ticking welfare timebomb, as these high rents will simply be unaffordable in retirement, or even as young couples begin to grow their families. More and more people will seek social housing, leading to longer waiting lists – a vicious cycle.

The new Government has adopted some radical housing policies. Unfortunately, some of them need adjustment. Clearly, we in Ireland need to catch up on the delivery of social housing, but we need to question the rationale of policies that risk such homes being seen as the “new normal” or indeed the only prospect for an entire generation.

The right to home ownership was fought for by our predecessors. It has allowed families of modest means not only to be secure in their own homes but also to acquire an asset and improve the lot of their family by making monthly payments no greater than they would pay if they had to hand over rent to a landlord. It seems to me to be an affront to those people to develop policies that leave them with no option but to rent or accept social housing.

We must, of course, develop policies that deliver social housing, but the mindset that criticises policies to support other types of housing must be challenged. The alternative presents an appalling vista of more and more people being forced into local authority housing, giving up the dream of owning their own home.

Much of the emphasis on public housing delivery is due to a misunderstanding about the component costs of housing delivery. The misconception that developers are holding out to make large profits is just that – a misconception. Costs, in the main, are driven by government-controlled items such as VAT, development contributions, planning bureaucracy, certain building regulations and the Part V requirement to hand over a percentage of the units for social and affordable homes – all “indirect” costs . These costs are ultimately met by the private home buyers and lead to a situation where many are priced out of the market.

I would challenge critics of private developers to produce an analysis of housing delivery by private developers versus housing delivery by public bodies. Such analysis would, of course, have to take account of the indirect as well as the direct costs of delivery, the costs of tender processes and also allocate a percentage of overhead costs of those bodies. An assessment of time from concept to delivery is also required. Only then can the cost of public delivery be properly compared to the cost of private delivery. In the absence of such analysis, there is a grave risk that proponents of public housing delivery may, in fact, be promoting a move towards a more expensive, cumbersome, less efficient delivery model.

Another misconception is that land is being hoarded. There are many locations where currently the cost to deliver housing would exceed the end value. No business, including developers, can be forced to operate at a loss.

It is time to get real. We have to deliver 140,000 houses between now and 2024. The delivery of high-quality, owner-occupied homes built – as they are now – efficiently by the private sector, should be encouraged and facilitated. It should not be a choice between public delivery or private delivery. The country needs both.

To succeed, we need a plan. That should include both supply and demand-led measures and measures to address the skills needs to deliver housing.

1. We should set targets for the next five years and clarify exactly how many of each tenure type are to be delivered and by whom. It is notable that the only hard target in the Programme for Government is a target for social housing.

2. We should develop a strategy to deliver land that is both zoned and serviced for home-building. Notwithstanding the views of those who are not on the frontline, there is, in fact, a shortage of such available land.

3. We should set up a dedicated fund, run by the Irish Strategic Investment Fund, to finance enabling key local infrastructure. Linkage to such infrastructure could be tied to affordability criteria.

4. We must consider how the burden of indirect, government-driven costs can be removed from the shoulders of the locked-out generation in exchange for affordable delivery by private developers.

5. We should change the Central Bank’s macroprudential rules that currently limit the amount of money a couple can borrow at 3.5 times their annual income. By increasing it to 4.5 times that income, they could avail of a larger mortgage, buy their own house and still pay lower monthly housing costs than the rent they currently pay to their landlords.

6. The approach of banks in relation to the drawdown of mortgages by those who are now on the Temporary Wage Subsidy Scheme should be urgently reviewed.

7. We should address the skills shortage in the home-building sector and consider the challenges that the new national retrofitting programme may cause. We cannot build houses if we do not have people to build them.

8. We should introduce shared ownership and equity loan schemes to assist the locked-out generation.

These measures, which are easily implementable, will help drive the delivery of houses in this country.

I believe the new Minister for Housing, Darragh O’Brien, when he says that he will “do his damnedest” to address the housing crisis, and I agree with him that he needs five years to do it. But he must avoid stymieing the delivery of housing by private developers by focusing almost exclusively on policies to support social housing delivery.

This Government must also promote policies that will deliver houses that the vast majority of Irish people want: a home that is their own, that will not financially break them in old age, and which offers them security and peace of mind now and in the future.