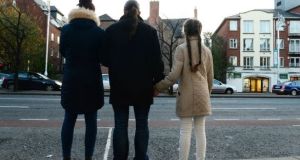 There are 413 families now in hotels – the lowest number since August 2015 and less than half the peak number of 871 in March 2017. File photograph: Cyril Byrne

The number of homeless families living in Dublin hotels has hit a five-year low, according to a new report from Dublin City Council.

However, concerns are emerging over the council’s ability to accommodate rough sleepers in the winter period, with the loss of 500 hostel beds due to coronavirus restrictions.

The use of hotels to accommodate families is heading towards levels last seen before the crisis in family homelessness emerged. There are 413 families now in hotels – the lowest number since August 2015 and less than half the peak number of 871 in March 2017.

The council’s head of housing, Brendan Kenny, said improved availability of rental accommodation, including Airbnb lets; the moratorium on evictions; and a fall in the number of people leaving the family home, have all contributed to the reduction.

The leases are currently for 12 months, and in the two-month period from March to May, when coronavirus restrictions were initially introduced, 77 families were moved from hotels to self-contained apartments.

Mr Kenny said these families are still included in the emergency accommodation figures, but he hopes many of these rental agreements could be made permanent.

“Owners and landlords probably thought at the time the Covid-19 restrictions would only be short lived, but as time goes on, having permanent tenancies and a certainty of funding is something we think will be more attractive to them.”

Some 94 families sought emergency accommodation in January, 80 in February, 42 in March, 14 in April and 25 in May.

“In the months pre-Covid it was about 50:50 people citing evictions and family breakdown as the reason for needing emergency accommodation,” he said.

“We are seeing less family breakdown with people being more reluctant to leave the family home. Intergenerational families are perhaps becoming more tolerant of each other.”

However, he said, while the situation for families was improving significantly, the outlook for single homeless adults “is not so good”, he said.

“We need to source a significant further amount of emergency accommodation to cater for an increasing demand and with an eye on the upcoming winter period.”

The council has lost in the region of 500 hostel places as a result of pandemic health guidelines. Three facilities, where distancing measures could not be implemented had to be closed at Merchant’s Quay, Ellis Quay and Aungier Street, while numbers had to be reduced at other hostels.

The DRHE was working to replace these numbers and secure another 200 bed spaces, Mr Kenny said.