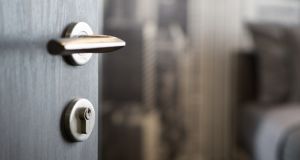 Tetrarch acquired the property at Westpark in Citywest in 2017 when it was an aparthotel with 80 units spread across six blocks. The company said that all units were in a “very poor state of repair” and many were uninhabitable. Tetrarch, which in May completed its acquisition of Howth Castle, subsequently secured planning permission to convert the six blocks into residential units.

Some 56 apartments have already been transferred to Clúid with the final two blocks comprising 28 apartments due for completion before the end of the year.

“We are very pleased to have agreed the sale of the Westpark Apartments to Clúid, helping turn a struggling aparthotel scheme into high-quality, long-term residential accommodation,” said Michael McElligott, chief executive of Tetrarch Capital.

“Our refurbishment work, which is nearing completion, is transforming a former dilapidated development into 84 fine apartments in what is Dublin’s fastest-growing suburb.”

Clúid is financing the project through a combination of loans from the Housing Finance Agency and financial support from the Department of Housing, Planning and Local Government.

Nearby the Westpark development, Tetrarch is advancing plans for the development of a scheme of apartments on a separate residential site.