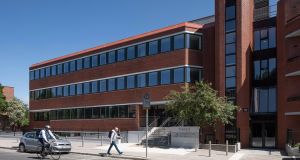 German fund Quadoro Doric has increased its overall investment in the Irish market to just under €142 million following its acquisition in an off-market deal of Three Haddington Buildings on Percy Place, Dublin 4.

Quadoro is understood to have paid €19.6 million to secure ownership of the property having decided to take advantage of the site-assembly opportunity which presented itself following its initial €24 million purchase of the the adjoining Two Haddington Buildings in 2018.

The German fund’s other investments in the capital include the Irish headquarters of Allianz at Elmpark Green in Dublin 4, which it acquired for €53 million in November 2019, and One Grand Parade in Ranelagh, for which it paid €26 million in 2017.

Outside of Dublin it paid €19 million in 2018 to secure ownership of the Webworks building in Cork.

In terms of its latest investment, Three Haddington Buildings is the second block at the recently relaunched Haddington Buildings office scheme to be refurbished to Grade A standards for reletting purposes. The building briefly comprises 20,131sq ft of office accommodation over four floors, along with 14 parking spaces.

Prior to being sold to Quadoro the first and second floors were pre-let to international law firm Beachcroft DAC on a new 15-year FRI lease from October 2019 at a rent of €52.00 per sq ft. The ground and lower ground floors are currently agreed to a single tenant.

Patrick Campion of HWBC and Domhnaill O’Sullivan of Savills acted on behalf of the vendor Deutsche Bank, while Jonathan Hillyer of Cushman & Wakefield acted for the purchaser.

The final phase of the Haddington Buildings is now under way, with extensive refurbishment planned for One Haddington. The property will be offered to the market shortly by HWBC and Savills as a pre-let opportunity for occupiers seeking a self-contained headquarters of 42,000sq ft over four floors and parking for 25 cars.

The property will be available on new lease terms, with early access for tenant fitout expected in the first quarter of 2021.