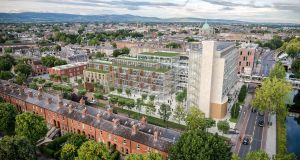 The investment arm of Germany’s DZ Bank has acquired a planned office block in Dublin from US property group Hines for an undisclosed sum.

Union Investment has acquired the planned 9,600sq m property through a forward funding deal which sees Hines and its Hong Kong partner, the Peterson Group, build the property on a speculative basis.

The property, at 2 Grand Parade, sits on what was the former headquarters of PJ Carroll’s cigarette company and subsequently Irish Nationwide Building Society. It is located adjacent to Charlemont Luas stop which is also, at present, expected to be the site of an underground station for the planned MetroLink project.

Residents at Ranelagh’s Dartmouth Square previously won leave by the High Court to seek to quash An Bord Pleanála’s approval for the office redevelopment. They dropped the planned legal action toward the end of last year.

Hines will develop the property which will completed by the middle of 2022. Union has bought the property on behalf of one of its property funds which previously acquired a property in Dublin 4 which is let on a long-term lease to Amazon.

“The influx of international companies and the expansion plans of office users already based in Dublin are creating excellent conditions for letting speculative developments and for achieving corresponding value growth,” said Martin Schellein, head of investment management for Europe at Union Investment.

The entire development at two Grand Parade consists of two sections with about a third of the rental space located in the Carroll’s building.

Including the forward funding of the two Grand Parade development, Union holds seven property assets in Dublin worth about €770 million, the Hamburg-based company said, adding that it will “continue to monitor the Dublin market for potential acquisitions in 2020”.