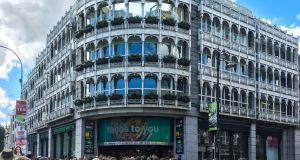 An Bord Pleanála rejected an appeal by Irish Life Investment Managers which had sought to regularise the planning status of the display sign. Photograph: iStock

It’s not exactly Times Square but the owners of the Stephen’s Green shopping centre in Dublin face having to remove the large digital advertising sign over its main entrance because of its visual impact on the surrounding area.

An Bord Pleanála has upheld a decision by Dublin City Council to refuse retention permission for the sign which is located at the junction of Grafton Street and St Stephen’s Green.

It rejected an appeal by Irish Life Investment Managers which had sought to regularise the planning status of the display sign which covers over 17 square metres.

The board said the proposed development to be retained was located in an area of significant urban design quality.

It said the advertising sign by reason of its scale, design and location at a significant junction would “seriously detract from the urban design quality of the area” as well as affecting its visual amenities.

Irish Life Investment Managers, which was one of the co-owners of the shopping centre before it was bought by a fund managed by Davy Real Estate for around €175 million at the end of last year, claimed the council’s development plan supported advertising in the commercial city centre in locations such as their building, which was a focal point for pedestrians and a major urban plaza.

It argued the advertising sign did not have a negative impact on the visual amenity of the area.

The shopping centre had sought longer operating hours for the sign beyond 12 noon to midnight – the restriction imposed as part of the temporary grant of planning permission in 2016.

It had requested approval to operate the sign between 7am and midnight which it claimed represented the only change to the previous application four years ago.

The shopping centre indicated it would also be willing to accept a condition that it devote a portion of the use of the advertising sign to “public service” messaging.

The application for planning permission in 2016 was made after the council has issued the shopping centre with an enforcement notice about the unauthorised status of the advertising sign.

Dublin City Council refused planning permission at that stage but the decision was successfully appealed.

Irish Life noted that An Bord Pleanála in that decision had acknowledged that the shopping centre was a 20th century building where a more modern type of signage was appropriate.

However, an inspector with An Bord Pleanála said Grafton Street had maintained its significance as a shopping street despite pressures from out-of-town retail centres in part because of the policies adopted by the council to control the size and quality of advertising in the area.

The inspector said the Stephen’s Green shopping centre and its display sign was a “very significant visual marker” in the area.

He claimed the nature of the sign was also significant because of the intention to vary its images and text quickly over time.

The inspector described the sign as “an incongruous block” and visually disruptive.

10 Are you mad to keep your money in prize bonds?