Q&A: What’s this about a dispute over Stillorgan’s Leisureplex?

Some 16 years after planning for apartments was first submitted, the site remains undeveloped 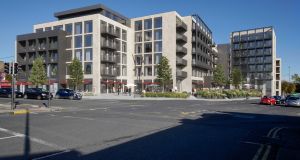 A computer-generated image of the apartments that have been approved for the Stillorgan Leisureplex site.

A site in Stillorgan containing a bowling alley, amongst other things, and affectionately known to many across Dublin is the subject of court action with its owners allegedly refusing to vacate the premise. The case has now been admitted to the fast track commercial court, so the outcome of the case, and the future of the Stillorgan Leisureplex, will soon be decided.

US real estate investment giant Kennedy Wilson has claimed that its €100 million redevelopment plan for the site, where it has permission to build 232 apartments, is being delayed by a refusal of the operators of the Leisureplex to vacate the premises.

Who operates the Leisureplex?

Brothers Ciaran and Colum Butler are behind the business, which now includes six outlets, most of which are in Dublin. They’re perhaps better known, however, as the Irish master franchise holders for coffee chain Starbucks. They also operate TGI Fridays, Dante’s and the Mao chain of restaurants. Since the country’s first Starbucks chain opened in the Dundrum Towncentre in 2005, Ireland has become home to more Starbucks per head of population than anywhere else in Europe.

Is there something special about this site?

Not particularly, although it does sit on a prime piece of land in Stillorgan. But were it to close, this would end the presence of the Leisureplex brand in south Dublin. For bowling enthusiasts, this obviously isn’t to be welcomed. American rock star Bruce Springsteen went there after his 2016 Croke Park gig. In 2012 he’s reported to have booked out the entire place.

So what’ll Stillorgan look like after the Leisureplex closes?

This area of south Dublin is becoming a hive of construction activity. While Kennedy Wilson intends to build 232 apartments on the Leisureplex site, it’s also planning to deliver four restaurants and cafés and two retail units. For residents, it is planning a concierge services, a cinema, a gym and a residents lounge. Cairn Homes, meanwhile, is active across the road. The housebuilder was in 2018 granted permission for a mixed-use scheme consisting of 151 student accommodation units (with 548 beds), 103 apartments, retail and café units, co working spaces, and a community sports hall. Kennedy Wilson also owns the Stillorgan shopping centre - Ireland’s first - across the road from Leisureplex.

When did Kennedy Wilson take ownership of the Leisureplex site?

The US real estate investment group bought it in 2016 for €15 million, a fraction of the €65 million Johnny Ronan and Richard Barrett’s Treasury Holdings paid to acquire it in 2006.

Previously, Treasury had sought to do what Kennedy Wilson is effectively doing now. The company engaged in consultations with the local community with a view to devising a masterplan for the bowling alley site along with the shopping centre but its ambitions were brought to an abrupt halt by the economic crash in 2008.

Did the Butler’s ever plan anything beyond a Leisureplex?

They did. Prior to the acquisition by Treasury Holdings, they had their own plan refused by An Bord Pleanála. They had intended to build 314 apartments, a new library, commercial and retail space, a new leisure building and a gym. That plan, first submitted in 2014 was ultimately rejected.

The Butler’s have proposed to buy the Leisureplex site from Kennedy Wilson but that was rejected. The company they operate has said it intends putting in a claim for a new tenancy under landlord and tenant legislation. In any event, with admission to the fast-track commercial list, the case will likely be decided by the courts.