Corum acquires One Kilmainham Square and Classon House from Avestus 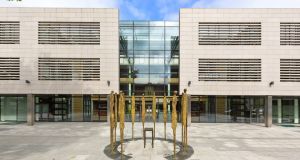 One Kilmainham Square is located in close proximity to Heuston station and Heuston South Quarter.

The completion of the purchases of One Kilmainham Square in Dublin 8 and Classon House in Dublin 14 brings Corum’s overall investment in Ireland and Northern Ireland to more than €206 million to date. It also represents a ramping up in the pace of the company’s activity here, coming as it does just three months on from its €21 million purchase of the Tesco supermarket in Gorey, Co Wexford.

In terms of its latest investments, it is understood Corum paid about €33 million to secure ownership of One Kilmainham Square, and a further €27 million in a separate off-market deal for Classon House. Corum was advised in both transactions by Cushman & Wakefield.

One Kilmainham Square briefly comprises a modern five-storey grade-A office block with basement car parking. Located within close proximity to both Heuston Station and Heuston South Quarter (HSQ), the property was offered for sale at a guide price of €32 million by agent Knight Frank last October.

Corum has acquired the property with the benefit of long-term leases to several leading international occupiers, including Heineken, Parexel Pharma and Klas Telecom. While the building is producing an annual rental income of €2.07 million currently, there is an opportunity for Corum to increase this in the short term through the letting of a vacant office suite of 393sq m, and the completion of a rent review on the first, second and and third floors in early 2020. The weighted average unexpired lease term is 7.3 years (5.62 years to break).

The sale of One Kilmainham Square meanwhile provides the vendor, Avestus Capital Partners, with a significant return on its original investment.

Avestus acquired the building along with two other office properties at 51-54 Pearse Street and Magennis Court on Pearse Street for about €45 million in 2016 as part of a joint venture investment programme with Ares Asset Management.

Having sold the two Pearse Street properties for €27.2 million last year, the sale of One Kilmainham Square for €33 million suggests Avestus and its joint partners have secured a return of 33.8 per cent on their original investment, based on the overall €15.2 million uplift in the portfolio’s value.

Corum’s €27 million off-market acquisition of Classon House at Dundrum in south Dublin. meanwhile, delivers a similar uplift for Avestus and Ares on their original outlay. The partnership acquired the property in 2016 for about €20 million when it was offered for sale by Green Reit as part of the “Glas Collection”, a portfolio of six properties comprising the Arena Centre in Tallaght, the Ormond Building, Parnell Car Park in Dublin, the Parkway retail park in Limerick and the Globe retail centre in Naas.

Commenting on the acquisition of One Kilmainham Square and Classon House, Philippe Cervesi, deputy general manager at Corum, said: “We are pleased that we have acquired two prime modern office blocks in Dublin which offer good rental growth prospects and stable income. We continue to seek suitable opportunities across Ireland.”

1 Covid-19 has shown that much of ‘normal’ life should have been binned years ago
2 Johnny Ronan loses out in court battle on 13-storey docklands plan
3 ‘Lockdown lobby’ needs to explain why this time would be different
4 Pfizer to seek FDA approval for Covid-19 vaccine in November
5 New hotel planned for Dublin’s Liberties
6 Looking to postpone your tax payment? Revenue sets December deadline
7 Irish retailers are not hotbeds of Covid-19 infection, figures suggest
8 LetsGetChecked and Chargify to create new jobs in Dublin
9 Recruiter Mason Alexander looks to injunct three former staff
10 Budget 2021: fuel prices rise and high-emission cars hit
Real news has value SUBSCRIBE