Main growth areas are counties within commuting distance of Dublin 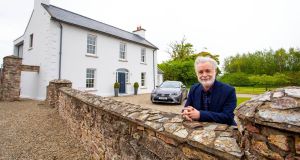 Author Eoin Colfer and Ballymorris House. The house outside Wexford town sold for €975,000

The residential property market is slowing down with the registered number of sales of houses and apartments across Ireland in 2019 down almost 4 per cent on the previous year.

A total of 54,963 residential sales have been recorded on the official Residential Property Price Register (RPPR)in the past year – 2,239 fewer than in 2018 – a decrease of 3.9 per cent.

Although some transactions completed in December have still to be filed, almost two-thirds of counties are expected to have experienced a downturn in property sales when figures are finalised. Only nine counties have recorded an increase in residential sales in 2019.

Some sales would have involved multiple units such as an entire housing estate or apartment block, including the most expensive deal – the €129.5 million paid by European private equity company Henderson Park for 266 apartments as part of a mixed-use development at Heuston South Quarter in Kilmainham, Dublin, which sold for a total of €222 million.

An analysis of the RPPR maintained by the Property Service Regulatory Authority shows the main growth last year was in counties within commuting distance of Dublin.

The strong growth in property sales in Wicklow was primarily due to the large number of new houses and apartments sold in the county. New properties in Wicklow accounted for approximately a third of all sales in 2019 – more than double the national average of 15 per cent.

More modest increases in the number of property sales were recorded in Laois, Louth, Wexford, Kilkenny, Kildare, Offaly and Cork.

In contrast, a fall in excess of 10 per cent in the number of completed housing sales were recorded in several counties, including Kerry, Sligo, Monaghan and Roscommon.

The biggest decrease was witnessed in Leitrim, where the number of transactions was down almost 15 per cent to 418.

The number of registered sales in Dublin, which accounts for approximately a third of all properties sold in the Republic, was also down significantly.

Again highlighting the strong activity in property markets in Dublin’s commuter belt, new homes represented over 40 per cent of all residential sales in Meath and around a third in Kildare, Wicklow and Louth.

At the other end of the scale new homes accounted for 6 per cent or less of all property sales in Westmeath, Monaghan, Leitrim, Kilkenny, Roscommon and Longford.

The RPPR is not recognised as a reliable indicator of property price trends but the slowdown in sales is consistent with the findings in the latest report from property website Daft, which recorded housing prices falling last year for the first time since 2012.

The Daft report showed that the cost of the average housing unit at the end of December was €250,766, down 1.2 per cent on the start of the year.

The decrease was driven largely by a fall in house prices in Dublin, although an increase in average prices was recorded in most cities outside of the capital.

Although the most expensive sale of a single home is believed to be a figure of over €20 million paid for the 5,000-acre Luggala estate in Co Wicklow, home of the late Guinness heir Garech Browne, the RPPR only records the value in relation to the house and immediate gardens at just under €11.6 million.

Instead the most valuable single property sold was the Castletown Demesne located in Co Kilkenny just outside Carrick-on-Suir, which sold for €12.6 million.

The biggest transaction in Dublin was the sale of 49 Ailesbury Road for €6.75 million, which is believed to have been bought by well-known businessman Dermot Desmond, who also owns an adjoining property.

In Cork, Kilfinnan Castle, a luxurious seaside property in the west Cork village of Glandore, sold for over €5.7 million.

*Other notable deals included the sale of the Donegal home of Dragon’s Den star Ramona Nicholas in Bundoran for €590,000

The former home of award-winning author Eoin Colfer, Ballymorris House outside Wexford town, was the most expensive property sold in Wexford when it fetched €975,000.