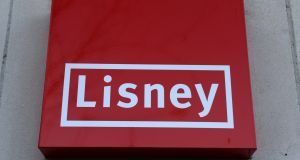 Lisney is preparing to open a new office in Blackrock, Co Dublin, which will effectively replace one that closed recently in Dún Laoghaire. Photograph: Dara Mac Dónaill

Irish estate agent Lisney recorded a spike in profits last year as a result of strong business activity and the sale of a car park in Dublin city centre.

Latest accounts for Lisney Limited and its subsidiaries show it made a pretax profit of just under €1.6 million in the year to the end of March 2019. This was up from €731,078 in the previous year.

Turnover rose by 12 per cent to just under €14.9 million, helped by the acquisition of specialist hospitality agent Daniel Morrissey and Sons in May 2018.

Its figures were also bolstered by a €1.3 million profit on the sale of a car park on Pembroke Lane.

Lisney’s business was boosted by some large transactions during the year, including the sale of the Boland’s Quay Development in Dublin’s docklands to Google.

Lisney’s managing director Duncan Lyster told The Irish Times that it sold about 450 second-hand homes last year, with an average price of about €750,000. Most of its sales are along the coast in south county Dublin, he added.

Earlier this week, property website MyHome.ie, which is owned by The Irish Times, said the average selling price for a house in the Republic rose by just 0.72 per cent last year.

Mr Lyster said house prices are “pretty flat” at the minute and an increase in the supply of new homes this year would further “dampen down prices”.

“Prices softened up late in 2018 and early in 2019,” he said, citing Brexit as a drag on sentiment. “Earnings aren’t moving dramatically and the macroprudential rules are having the desired effect.”

Mr Lyster said the upcoming general election could be a further negative for the property market here, with the possibility of a “throwaway comment” from a politician that could affect sentiment.

Lisney is preparing to open a new office in Blackrock, Co Dublin, which will effectively replace one that closed recently in Dún Laoghaire. It opened in Dalkey last March.

“We are seeing the benefits of having the Dalkey office because the values are higher out there and we’re hoping Blackrock will do the same for us.”

It also signed a new long-term lease on its head office and refurbished its Earlsfort Terrace base, where its advisory and transactional teams are located.

Mr Lyster said second-hand residential sales account for about a third of its business, as do commercial transactions. Advisory and valuation work makes up about a quarter of its revenues, with the balance coming from its base in Cork, where it sold about 50 second-hand homes last year.

The company closed the year with shareholder funds of €3.85 million. Lisney’s staff numbers rose by 11 to 116 while its payroll costs increased by 14 per cent to €10.6 million. Directors remuneration rose by 9.5 per cent to €3.7 million.