Turnover up nearly 50% at commercial property arm of estate agent 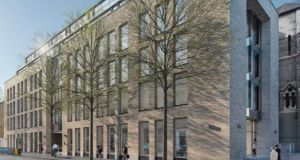 The redeveloped former offices of the European Union on Molesworth Street, Dublin, which is available through Savills

Directors at estate agent Savills are continuing to reap the benefits of a recovering commercial property sector.

Recently filed accounts show 16 directors at the company saw pay soar, with aggregate remuneration totalling €8.2 million in 2014, equivalent to an average of €329,600 each, including pension payments. This comes after directors’ pay rose 102 per cent to €4.87 million from €2.4 million in the 12 months ending December 2013.

Revenues at the division rose nearly 50 per cent during the year, climbing from €20.3 million in 2013 to €30.4 million as administrative expenses rose to €24.8 million compared to €17.6 million in the previous year.

Overall, directors’ remuneration for fiscal 2014 consisted of €6.8 million in emoluments and a further €1.39 million in pension contributions.

“The company performed very well in the improving property market. The benefits of the restructuring programme over the previous three years, which saw the company diversify across all property sectors, has had a positive impact on the underlying profits,” the directors said in a note.

Savills Ireland parent company, Savills Plc, which employs over 30,000 worldwide, announced group revenues of £622.7 million (€743m) for the first half of 2016, up 14 per cent versus the same period a year earlier. However, profits at the group’s British commercial property business more than halved due to the Brexit referendum.

1 Should my mam wait for house prices to drop before buying?
2 Cheers: Conor McGregor's whiskey races up the sales chart
3 Coronavirus: Big majority ‘uncomfortable’ returning to everyday activities
4 ‘I’m so lucky to be in the Caribbean – a million miles from Derry Girls’
5 Dublin drops out of top 50 in ranking of best cities for start-ups
6 Why we’re about to learn if we are really in the A-team
7 US ‘hard seltzer’ drink White Claw launches in Ireland
8 Joint accounts: if one of us dies, can the other access the money?
9 Chris Johns: Past is another country when it comes to our post-pandemic future
10 Ted Baker plans £95m cash call to survive crisis
Real news has value SUBSCRIBE