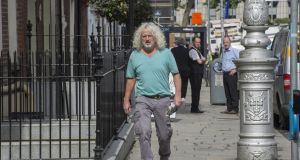 Mick Wallace: he clashed with Cerberus last year when he raised questions over the US fund’s purchase of a group of Northern Ireland-linked loans, called Project Eagle, from Nama for €1.6bn

Promontoria Aran, the company used by vulture fund Cerberus to buy a group of loans from Ulster Bank in late 2014 that included Mr Wallace’s debt, earned €214 million income from those liabilities last year.

Accounts just filed by the company show that it earned €54.2 million in profits after paying €18 million in tax. It valued the assets it bought from Ulster Bank at €1.1 billion at the end of last year.

The income earned included €193 million in interest and almost €20.7 million gained from individual debtors who cleared their liability to the company. Once it bought the loans from Ulster Bank, it had the right to demand repayment or to take control of any properties used to secure the debts.

The High Court adjourned a hearing dealing with the case this week to allow the TD to pursue alternatives to bankruptcy to save his family home.

Mr Wallace clashed with Cerberus last year when he raised questions over the US fund’s purchase of a group of Northern Ireland-linked loans, called Project Eagle, from State agency Nama for €1.6 billion.

Claims that prominent politicians and business figures were to benefit from the deal led to an investigation by the UK’s National Crime Agency and an ongoing inquiry by the Dáil’s Public Accounts Committee. Cerberus has denied any wrongdoing.

The TD maintains that he only discovered that the Cerberus-backed Promontoria Aran had bought his loan in late August 2015, two months after he first raised questions about Project Eagle.

Promontoria Aran is one of a series of Irish-registered companies used by Cerberus to hold assets bought in the Republic, UK and Europe in the wake of the recession.

Of this, a total of €46 million was due against two loans of €300 million each from another Cerberus company, its immediate parent Promontoria Holding 128, which is based in Holland.

Its parent company charges interest on one of the loans at 10 per cent. It describes the other as a “profit-participating loan”, and states that the interest on which the interest is determined is by the net profit earned during the period.

Promontoria Aran paid the remaining €20 million to Deutsche Bank, from which it borrowed €780 million at a commercial interest charge tied to wholesale rates.

Cerberus uses the same structure with all its Irish firms, bank debt combined with high-interest loans from another group company. This qualifies it to use the incentive available under section 110 of the Consolidated Taxes Act, 1997.

The current Finance Bill includes a change to this provision that will prevent companies such as Promontoria Aran from writing off repayments on Irish assets against their tax.

Mr Wallace said on Thursday that “the big problem with all of this is that what these funds are doing is legal, and it is legal because the Government is facilitating them while we are trying to deal with a housing crisis”.

The debt for which Promontoria Aran is pursuing Mr Wallace was originally due from his development company M&J Wallace. He personally guaranteed the liability.