Ardstone is now to turn its attention to sites it has assembled for 4,000 starter homes 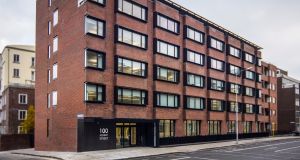 The Dublin-based independent investment company, Ardstone Capital, and CBRE Global Investment Partners, have made profits of more than €37 million on the upgrading and sale of three Dublin office blocks acquired over the past two years and sold on within the past month.

The partnership has just completed the sale of a newly refurbished office block at 100 Mount Street to Credit Suisse for €20.5 million. The five-storey over lower ground floor building with a floor area of 2,416sq m (26,000sq ft) was bought two years ago for €10 million and upgraded before two-thirds of the space was pre-let to Irish technology company Asavie. The two remaining floors were booked by UK recruitment company Harvey Nash and German insurance company Life Ray at rents of €484 per sq m (€45 per sq ft) before the block was sold to Credit Suisse at a profit of at least €5 million.

The same partnership is expected to register a profit of €17-€18 million after selling the newly developed eight-storey Velasco office building at Clanwilliam Place to Irish Life for €58 million. The 4,738sq m (51,000sq ft) glazed block is believed to be of interest to a range of high-tech companies because of its top quality finish and close proximity to Silicon Docks.

Ardstone and the CBRE fund also made a handsome profit – believed to be around €14 million – on the purchase, upgrading and sale within a two-year period of one of the original office blocks in the IFSC. It bought 2 Harbourmaster Place for €37.85 million and after carrying out a number of improvements – including a refurbishment of the entrance area and creating a new reception area and lift lobbies – sold it on to the German investor Real IS for €53.75 million.

Last December, the same partnership sold the newly refurbished Fleming Court office building on Mespil Road in Ballsbridge and six retail units in the Morrison Chambers at the junction of Dawson Street and Nassau Street at a profit of around €8 million.

Meanwhile Ardstone is now to turn its attention to the housing shortage in the greater Dublin area where it has assembled development sites for 4,000 starter homes. The company has raised capital of €200 million from global pension funds, including three Irish pension funds, and has commenced development work on its first site in Swords.