PAC to question Nama executives over lack of records 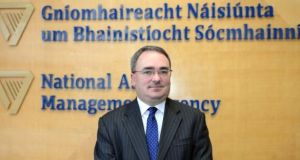 Nama chief executive Brendan McDonagh and chairman Frank Daly face questions over why records detailing discussions at meetings critical to its controversial €1.6 billion Project Eagle deal may have been destroyed.

The agency told the Dáil’s Public Accounts Committee (PAC) which is investigating the sale of its Northern Ireland loans, known as Project Eagle, that it did not keep the notes used to prepare the minutes of the two meetings at which the board decided to sell the assets.

PAC chairman, Fianna Fáil TD Seán Fleming, said on Thursday that he was surprised that the National Asset Management Agency did not keep the notes of the two meetings in December 2013 and January 2014 at which the board discussed selling the property loans, valued at £1.3 billion.

“Put simply this means these records have been disposed of and were destroyed,” Mr Fleming said. “Therefore, the committee has agreed to recall Nama to explain this matter”.

Nama faces tougher record-keeping rules since last year, when the Freedom of Information Act was applied to it. Corporate governance experts acknowledged that the agency was not strictly obliged to keep the notes, but said it was surprising that it did not.

Professor Niamh Brennan of UCD Michael Smurfit Graduate Business School said that Nama was correct when it argued that the minutes were the official records of its board meetings.

“In terms of the detailed notes of what was said during the meeting, I would be very surprised if a company secretary were to destroy those, as they would want to cover his or herself should anyone query the minutes,” she added.

Professor Irene Lynch of University College Cork’s school of law, pointed out that the agency would have faced different obligations regarding the records it kept before it was came under the Freedom of Information Act regime. However, she pointed out that organisations should ideally keep notes of their meetings.

Claims that business people and politicians in Northern Ireland were to benefit from the sale of Project Eagle to US vulture fund Cerberus in 2014 have prompted parliamentary and criminal investigations the Republic, UK and US.

The PAC was specifically seeking evidence of Nama board discussions dealing with how the loans would be valued in before the agency put them on the market in early 2014.

A report by Comptroller and Auditor General Séamus McCarthy, found that the Project Eagle sale could have cost the taxpayer up to €200 million, which Nama disputes.

The row between the two State agencies boils down to the method used to value what Project Eagle’s loans may have been worth when they were put on the market against what they might have been worth had Nama kept them.

Mr McCarthy’s report said that the agency should have valued them using a 5.5 per cent discount rate, while Nama argued that it used 10 per cent, which it said was more realistic.

However, while Nama has said the board discussed the 10 per cent rate, the agency has never produced written evidence of those talks. The PAC asked for notes taken at Nama board meetings held on December 12th, 2013 and January 8th, 2014, which debated and decided on selling Project Eagle, to find this evidence.

According to the PAC’s statement, Nama responded by saying that once its board minutes were adopted they become the official record of the meeting. “As a result, the Board Secretary’s contemporaneous notes of the meeting are transitory records and are not retained,” it said.

The PAC is likely to recall Mr Daly and Mr McDonagh next week. It questioned both men over an eight hour session recently, but the next hearing is likely to be shorter. Nama did not comment on the latest development.

1 Ross O’Carroll Kelly column 'not racist towards English people'
2 What is in the EU’s €750bn recovery plan and how will it affect Ireland?
3 Irish economy to contract by 12%, ESRI forecasts
4 Brown Thomas and Arnotts shoppers will be able to book time slots for entry
5 Beware of the rush to get back to normal business amid Covid-19
6 GSK to produce 1bn doses of coronavirus vaccine booster in 2021
7 EU needs to rebuild GDPR after only two years
8 EasyJet, American Airlines to cut 30% of staff amid coronavirus disruption
9 Pandemic Unemployment Payment: Your questions answered
10 Cairn Homes seeks permission for 611 apartments on RTÉ site
Real news has value SUBSCRIBE