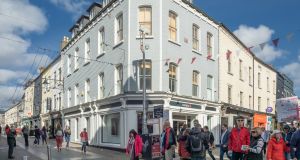 A prime retail property at 48 William Street in Galway city centre has been sold for more than its €2 million guide price by agent Lambert Smith Hampton.

The protected structure, which occupies a top corner pitch on this pedestrianised street, was first offered for sale last October and is expected to come on the letting market shortly.

The quick disposal of number 48 bodes well for the sale of the Eason shop at nearby 33 Shop Street. It came on the market earlier this month at more than €8 million through agent Bannon and is being sold on a sale-and-leaseback basis. Eason, which has occupied the building for the past 30 years, is to take a 25-year lease on the premises at a rent of €525,000 per annum.

Tony Kernan, associate director of retail at Lambert Smith Hampton, said the sale of number 48 “attracted interest from a wide range of parties, achieving a price which was considerably in excess of the €2 million asking price”.

JLL acted on behalf of the purchaser.