Rothwell has completed over €1.5bn of transactions for firm since 2015 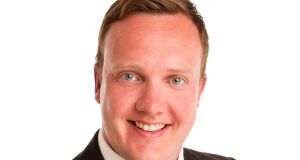 CBRE has appointed Kyle Rothwell as head of investment properties.

He joined CBRE in 2015 but, prior to that, was a director in financial adviser Key Capital Real Estate where he specialised in loan acquisitions and restructuring solutions.

Rothwell was one of the lead advisers to the Starwood Capital Group in its acquisition – along with Key Capital in Dublin and UK-based Catalyst Capital – of Nama’s first loan book sale. Dubbed Project Aspen, the loans related to property developer David Courtney and had a face value of €810 million. The consortium which bought them paid about €200 million for the portfolio – or just under 25 cent on the euro for the deal.

During his time in Key Capital Real Estate, Rothwell was involved in restructuring over €1.5 billion of real estate backed loans. Since re-joining CBRE in 2015, he has completed over €1.5 billion of transactions for the likes of Starwood Reit, Davidson Kempner, Patrizia, DWS, Oaktree and Deutsche Bank.

Rothwell recently acted for DWS (Deutsche Asset Management) in its acquisition of Next’s flagship store on Henry Street for more than €44 million – that transaction closed last week. He also acted for DWS last year when it bought Westend Retail Park from Green Reit for €147 million.

1 Should my mam wait for house prices to drop before buying?
2 Pilita Clark: Why we’re about to learn if we are really in the A-team
3 Chris Johns: Past is another country when it comes to our post-pandemic future
4 Irish whiskey sales near milestone of 12m cases a year
5 ‘I’m so lucky to be in the Caribbean – a million miles from Derry Girls’
6 Military-style planning can help businesses battle Covid-19 survival threat
7 ‘I have a talent for justifying purchases’
8 Citigroup warns that markets are out of step with reality
9 US ‘hard seltzer’ drink White Claw launches in Ireland
10 Hard-hit SMEs get ‘paltry’ €11m worth of loans under State scheme
Real news has value SUBSCRIBE