Fitzwilliam sells Next flagship building on Henry Street for €44m 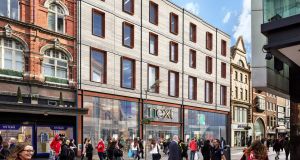 Fitzwilliam Real Estate Capital (Fitzwilliam REC), headed by solicitor and property developer Noel Smyth, has sold a retail development at 7-9 Henry Street, Dublin 1, to asset manager DWS for around €44 million. The prime retail premises, which is nearing completion, has been pre-let by leading fashion retailer Next at an annual rent of €1.8 million.

Next is due to vacate a double unit in the nearby Jervis shopping centre, which it has occupied for more than 20 years, in order to move to the new flagship 3,300sq m (35,521 sq ft) Henry Street unit.

Mr Smyth’s company had quietly been seeking around €42.6 million for the Henry Street property, known as the Blue Building, last year through agents Cushman & Wakefield, according to industry sources. As the price achieved exceeded this, it suggests there were a number of interested parties, and the purchase price reflects a net initial yield (NIY) of around 3.75 per cent.

Mr Smyth said the sale “can only be welcomed as positive and confident news for the Irish property and retail sectors”.

DWS’s purchase of the Henry Street store is its second major recent acquisition in Dublin. In January, it bought the €70 million Staycity aparthotel on Francis Street in Dublin 8. Through this latest acquisition, DWS joins a cohort of international investors who own buildings on Henry Street and Mary Street.

Investors’ confidence in Henry Street has been increasingly apparent recently, as illustrated by the fortunes of the Skechers shop at Number 4, three doors away from Mr Smyth’s unit.

In 2012 Irish Life sold 4 Henry Street to Israeli investor Igal Ahouvi for €4.15 million, with the benefit of Skechers as a tenant. Mr Ahouvi enjoyed a net initial yield (NIY) of 7.2 per cent on his acquisition, reflecting the low level of market sentiment and property values at the time. But investment yields on the street, one of Europe’s busiest shopping thoroughfares, have contracted significantly in the intervening years.

Mr Ahouvi banked six years of returns from the unit before selling it back to Irish Life last year with the same tenant in situ for a reported €8.65 million, more than double what he paid, representing a NIY of 3.8 per cent.

Aside from contracting yields arising from Dublin’s buoyant property market, the area has also benefited from increased investment and new development, with various new schemes planned by leading developers – Mr Smyth being chief amongst them.

When Mr Smyth sold the landmark Arnotts department store to the Selfridges Group in 2015, Fitzwilliam REC retained a number of strategic development sites in the area that were assembled by Arnotts during the Celtic Tiger era as part of its Northern Quarter development play. Mr Smyth has plans for a number of developments on those sites, including two new hotels.

According to BNP Paribas Real Estate’s recent Eye On Retail report, which focused on Dublin’s high streets, UK owners such as Hammerson and Aviva already owned 11 premises, amounting to 18 per cent of the two streets’ buildings, prior to the DWS deal.