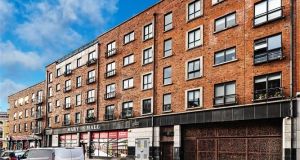 apartments recently let agreed at Wolfe Tone Lofts in Dublin 1 have had advertised rents of €2,200 per month for a two-bed and €1,800 for a one-bed.

In June 2016 the building, formerly known as Stafford House, was acquired by a company linked to development group McGarrell Reilly for €6 million, according to the property price register. The group, headed by Seán and Raymond Reilly, constructed three new penthouses on top of the existing structure and renovated all of the existing 43 apartments and communal areas.

When they acquired the block its apartments were achieving well below market rents, with two-beds earning an average of just €1,078 per month and one-beds attracting just €788 per month. Current market rents are more than double those monthly rates, with similar apartments recently let agreed with advertised rents of €2,200 per month for a two-bed and €1,800 for a one-bed.

It is likely that even after construction and renovation costs are taken into account, the Reillys may have nearly tripled their money on the investment in less than three years. The sharp increase in rents achieved by apartments in the block on foot of the renovation, coupled with contracting yields and a surge in investor interest in the private rented sector (PRS) all contributed to the price achieved. While the transaction is listed in the property price register at €22 million, this likely relates to the residential aspect only, with a further undisclosed sum paid for the commercial unit.

Last year, Avestus launched a new PRS fund that raised €160 million of equity from investors including Nordic and German institutional investors. When leveraged, the fund is expected to have about €290 million to deploy on residential investments, which it intends to hold and rent.

While the Ireland Strategic Investment Fund is also an investor in the fund, it is not an investor in the Wolfe Tone Lofts deal, as it will invest only in the delivery of new housing stock, not existing stock. Avestus’s PRS fund is understood to be in talks with various developers to forward fund the construction of new build-to-rent schemes.