The next decade may be a tough one for investors

After a soaring decade for US stock market, returns could fall sharply in the new decade 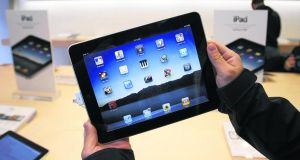 Most strategists agree that the US, driven by surging growth from technology stocks such as Apple and Amazon, has earned its leadership role. Photograph: Paul Sakuma/AP Photo

The soaring US stock market has led the world over the past 10 years, but a growing number of strategists are cautioning that the 2020s may prove to be a much leaner decade for investors. A $10,000 investment in the S&P 500 a decade ago would have been worth almost $35,000 at the end of 2019, but it seems no one is predicting a repeat performance.

Markets have a tendency to revert to the mean, and good decades tend to be followed by bad decades. After inflation, US stocks have averaged annualised returns of 6.5 per cent over the past century but performance over any given decade can diverge wildly.

Investors actually lost money in the first decade of this century, setting the scene for the outsized profits that followed.

When 10-year returns have been half the long-term average, notes Michael Batnick of Ritholtz Wealth Management, returns over the next decade jump to 9.6 per cent. However, when 10-year returns have been twice the average, annual returns over the next decade fall to just 3 per cent. In other words, when markets have been as extended as they are at the moment, “returns have tended to fall sharply in the following decade”. Batnick’s colleague Ben Carlson notes that things were very different between 2000 and 2009, when emerging market stocks gained 162 per cent compared with a 9 per cent loss for the S&P 500. That relationship “completely reversed this past decade”, with emerging markets gaining just 49 per cent compared with the S&P 500’s aforementioned return of some 250 per cent.

This dominance has led some to complain that the US market is in a bubble, but most strategists agree that the US, driven by surging growth from technology stocks such as Apple and Amazon, has earned its leadership role by constantly delivering superior earnings over the last decade.

Nevertheless, valuations do look elevated relative to history. The US market currently has a cyclically adjusted price-earnings (Cape) ratio of 30.8, according to Research Affiliates founder Rob Arnott. That’s higher than 96 per cent of historical readings, almost twice its historical average and “substantially higher” than Arnott’s estimate of fair value (23.1).

The Cape indicator has critics who point out its many limitations, although there is general agreement that a variety of other valuation metrics – for example, forward price-earnings ratio, price-to-sales ratio, price-to-book ratio, market cap to GDP – indicate the US is trading at a valuation premium relative to other markets that is significantly greater than historical norms.

Additionally, while there have been precious few indications of exuberance among ordinary investors over the past decade, many now appear to be fully invested, according to Ned Davis Research data. The firm says the average US household has allocated 53.8 per cent of its portfolio to stocks. That’s very high. In the past, similar readings have been followed with annualised real returns of just 1.9 per cent over the next decade.

A raft of other voices have issued similarly muted forecasts. GMO, the value investing firm headed by renowned British investor Jeremy Grantham, is especially pessimistic, with its latest seven-year forecast estimating that US equities will lose 3.9 per cent a year after inflation. Research Affiliates agrees that “much lower returns” are likely, saying US stocks will only barely beat inflation over the next decade.

Bulls complain that both GMO and Research Affiliates have been too pessimistic for some time now, although you don’t have to be a perma-bear to be cautious on the US. Index fund giant Vanguard, for example, says returns over the next decade are likely to be “modest at best”, forecasting nominal annual returns of just 3.5-5.5 per cent.

Valuation is “far more accurate than any other variable” in determining long-term returns, says Morgan Stanley, which expects an “abnormally low-return decade” for US stocks. So does Morningstar Investment Management, which expects nominal annual returns of just 1.7 per cent for US stocks over the next decade. Not everywhere is expensive, however, with many strategists arguing that European and emerging market equity valuations look unchallenging.

A Cape ratio of 13.4 is cheaper than stocks in emerging markets have been 72 per cent of the time, says Arnott, and indicates that emerging markets are poised to deliver real returns of 6.8 per cent a year over the next decade. If one excludes the US, global equities “are expected to return a still-robust 4.9 per cent a year in real terms”. That viewpoint is echoed by Vanguard; outside the US, global equities are likely to deliver nominal annual returns of 6.5-8.5 per cent. Not everyone is wary of the US. “When someone tells you they’re making a contrarian recommendation to overweight Europe or Japan versus the US, be sure and ask them how many times they made the same recommendation before,” says JP Morgan’s top strategist, Michael Cembalest. “Think about where the largest equity market gains often come from in a low-growth world: the tech sector, rather than sectors with lower and more volatile earnings growth (basic materials, energy, industrials)”.

In the US, the tech sector has a much higher weighing than the other three sectors, while the reverse is true in regions such as Europe and Japan. Additionally, when you look within sectors, says Cembalest, you find that US companies usually have higher profitability than their international counterparts. Consequently, “something unusual would have to happen for the US to underperform on a sustained basis”.

Still, history shows the US often has underperformed over long periods. European markets outperformed the US in the 30 years prior to 1999, notes fund firm Wisdom Tree, which asks: “Who is to say the US will always outperform looking forward?” The size of the US market relative to the global market has fluctuated over time, agrees Vanguard, from as low as 29 per cent in the 1980s to 55 per cent in 2018.

A report by Bridgewater, the world’s biggest hedge fund, notes that the US outperformed in the 2010s, underperformed in the Noughties and was one of the best performers in the 1990s. Before that, the report adds, “you have to look back to the 1920s to find a decade in which US equity performance was better than middling”. Nothing is certain and various stock markets may well surprise to the upside or to the downside over the coming decade, says Research Affiliates, but investors should consider that the outsized returns of the last decade are “very unlikely to repeat”. Overweighting non-US markets may partly remedy the situation, but it seems long-term investors should aim to save more money and brace themselves “for more muted returns”.