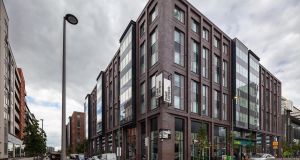 The Point Campus: it has 966 bedspaces and features amenities including a gym, cinema and roof terrace

The largest off-campus student accommodation complex in Ireland, Point Campus in Dublin 1, has been sold to global asset manager DWS Group for a sum understood to be around €172 million, which is expected to provide it with an initial yield of around 4.75 per cent.

Comprising some 966 bedspaces, the complex features amenities including a gym, cinema, common room and roof terrace. The price paid equates to an average of just over €178,000 per bedspace.

Reported rates for rooms start from € 230 per week and range up to € 330 per week for a self-contained studio, with a range of room types and lease terms on offer. Host, Cork developer Michael O’Flynn’s student accommodation management company, operates the complex.

O’Flynn and global fund manager BlackRock partnered together in 2016 to acquire the prime 0.93 hectare (2.3 acre) site which is adjacent to the Point Square shopping centre and 3Arena venue in order to develop the scheme.

The site was purchased with the benefit of an extant planning permission obtained by receivers appointed over assets of Wintertide, a company that formed part of Treasury Holdings’ former property empire.

When the site was sold to O’Flynn and BlackRock in 2016 it was reported that it achieved “more than €20 million”. Accounts filed by the receivers of Wintertide suggest the developers actually paid nearly €25.5 million for the docklands site.

In total a spend of more than €100 million was expected including the site cost and construction costs. Unless the anticipated costs spiralled well above initial expectations, the € 172 million that was paid by DWS will likely result in a very significant profit for the developers.

A subsidiary of Deutsche Bank, DWS has become one of the most active investors in the Irish property market. During 2019 alone it was linked to the acquisition of Next’s flagship store on Henry Street for around € 44 million; the forward-funding of a € 70 million aparthotel development named Tivoli Place in Dublin 8; and the €108 million purchase of the Fairway build-to-rent apartment scheme at Cualanor, Dún Laoghaire.

The Point Campus sale concluded just before Christmas, and was one of a number of student accommodation assets that BlackRock has sold since November 2019. Agent Savills was appointed last year to handle the sale of a portfolio of four student schemes, dubbed the Onyx collection, spread across Dublin, Leeds, Sheffield and London.

O’Flynn Group’s management company, Host, operated all four properties and its UK development arm, Tiger Developments, specifies on its website that it developed the Dublin, Sheffield and London properties. While the Leeds property is not showcased on its website it is entirely possible that the company developed that scheme also.

The London complex, known as The Project at Hoxton, was reportedly sold for €93.4 million (£79m) to investor M&G in December.

The Elements in Sheffield and The Foundry in Leeds properties were reportedly sold to Singapore-listed Far East Orchard in November. A press release issued by the company, made available through the Singaporean stock exchange, suggested it paid € 77.4 million (£65.5m) in total for the two schemes.