Office investment with potential in Dublin 4 on sale for €6.7m

Communication House is let to International Telecommunications Ltd for €419,631 per annum 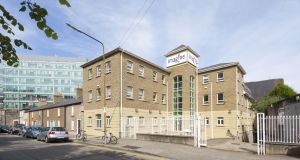 An office investment with potential close to Google on Barrow Street in Dublin 4 is on the market for €6.7 million through agent Cushman & Wakefield. At the quoted price this would equate to a net initial yield of 6 per cent.

Communication House, which was built in the late 1990s, is a three-storey over basement building that extends to 865sq m (9,636sq ft). It is arranged in two blocks connected by a central core feature tower and includes 17 car-parking spaces. The spec includes suspended ceilings, raised access floors and an eight-person passenger lift.

It is let in its entirety to International Telecommunications Ltd on a 25-year full repairing and insuring lease from January 1st, 1999. The rent is €419,631 per annum with the next of five yearly upwards-only rent reviews due in January 2019.

Imagine Telecommunications Ltd is part of the Imagine Communications Group which was established in 1993 to provide fixed and wireless communication services to business and residential customers.

Subject to planning, according to the agent, the property has potential to add further office space via an extension to the front courtyard and an additional floor to the rear.

Communication House is a short walk from the Dart at Grand Canal station and close to the shops and restaurants clustered around Beggars Bush.