Number of cranes on Dublin skyline has doubled since February 2016

Crane Watch: 54 of 68 machines concentrated in pockets of southside 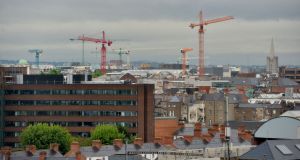 There were 68 construction cranes visible over the centre of Dublin on September 1st from the seventh floor of the Irish Times building on Tara Street. This is a drop of one on July’s total of 69 but exactly double the 34 cranes recorded on February 1st, 2016, when the newspaper’s crane survey was launched.

Site-clearance work is now well advanced for a new 350-unit student residence on Pearse Street after the demolition of Oisín House, which was previously occupied by the Department of Social Protection. It is one of several Pearse Street buildings owned by Trinity College that are being redeveloped.

Work on a much larger student accommodation scheme of more than 900 units is moving ahead beside the Gibson Hotel in the north docklands. Developer Michael O’Flynn and global fund manager BlackRock Real Estate have partnered to build the large scheme, which will have a development cost of around €100 million.

Construction is still concentrated in various pockets south of the Liffey – Ballsbridge, the docklands and Molesworth Street – where there were 54 cranes (down three from two months ago). Fourteen cranes were visible north of the Liffey, two up on July, where activity is beginning to increase downriver of the new Central Bank building on North Wall Quay.

Building work, however, is being disrupted by ongoing strike action of crane operators who have been picketing sites across in the city in a dispute over pay since June. With other workers refusing to pass the pickets, the strike action, which was upped to two days a week earlier this month, has halted work on several sites. Crane drivers are seeking staggered pay hikes that would see their hourly rates rise to €30 an hour by 2019.

With the Irish economy expected to continue its recovery and a number of significant developments due to enter the construction phase shortly, it is likely the number of cranes on Dublin’s skyline will increase.

We will continue to conduct a crane survey once a month to track construction levels in the city centre.