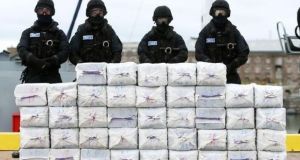 The Government is looking for warehousing and transport facilities to help the Revenue Commissioners deal with a mountain of seized contraband, including large volumes of cigarettes and tobacco, cars, alcohol and other goods.

Tendering has opened for companies ready to bid for the project, which will involve providing a new State warehouse at Dublin Port.

On August 30th, the Office of Government Procurement on behalf of the Office of the Revenue Commissioners issued a “prior information notice (Pin)” last Wednesday for the provision of management and support services to develop the new warehouse complex.

The procurement office stressed this was a Pin and not a call for competitive bids. The intention was to “advise the market” about the development and alert companies that tenders would be sought.

The project effectively involves developing a logistics facility to handle all the goods seized by Revenue in collaboration with the Garda and, when necessary, HM Revenue and Customs , other revenue and customs administrations worldwide, and the European Anti-Fraud Office.

“The overall requirement is for the provision of transportation, storage and destruction/disposal of seized/detained and other goods,” as described in the Pin document. Revenue wants the tenderers to deliver these various support services while also reducing the impact on the environment of Revenue’s activities. It wants to be as cost-effective as possible when hauling, storing and destroying seized goods while also ensuring the security of these materials.

The notice also states Revenue wants to maximise benefits from the destruction and disposals of contraband while minimising any risks to staff. The project does not include the handling of seized drugs, however.

“By way of clarification, the services to which the Pin relates involves the transport and disposal of tobacco, oils, alcohol, vehicles and counterfeit goods, but does not include services in relation to drugs seized,” a Revenue spokeswoman said.

Providing space, transport and management facilities for Revenue activities in this area may seem simple enough until you look at the kind of space that might be needed.

In 2016, Revenue operations in collaboration with the Garda netted 44.6 million cigarettes, worth an estimated €23.5 million, and 1.5 tonnes of other tobacco products, worth €740,000. More than 110,000 litres of spirits, beer and wine were seized, along with 13,500 litres of laundered fuel oils. With 1,588 seized vehicles involved in movement of contraband or for evading VRT, it all adds up to a large volume of material.

In the same year, Revenue seized 1.7 tonnes of other drugs, including cannabis, cocaine and tablets.

The seizure of contraband goes on and on. In August alone, Revenue seized 260,000 cigarettes and 155 litres of alcohol products. It also stopped a truck carrying 25,000 litres of suspected laundered fuel oil tagged as “apple juice”.

The new warehousing and transport set-up is therefore likely to be quite busy, given near daily discoveries of contraband moving into and out of Ireland.

The storage aspect of the new facility is also significant. When excisable goods or vehicles are seized, there is a 30-day period during which a person could take an action to have the goods returned. If no claim is made or if a court case is taken and lost, then Revenue is free to dispose of the goods by selling or destroying them. So materials may remain in limbo for some months before they are got rid of by Revenue.

The Pin document does not provide any guidelines on the required size or scale of the operation. These details will become available when “request for tender” documents are prepared. These will be published “in due course”, the Revenue spokeswoman said.

1 Should I switch bank now with Ulster Bank at risk of closing?
2 Aldi empire wracked by family feud
3 Belfast mailbox address used by account holder in Russian money-laundering scheme
4 Swiss drug giant Roche pays €380m for Irish biotech Inflazome
5 EU watchdog calls for end to Covid loan payment breaks
6 Data privacy advocate submits further evidence in Google ads inquiry
7 Fixed-rate mortgages: shop around because there are deals to be had
8 Hedge fund managers the losers as Porsche completes audacious takeover of Volkswagen
9 Petrel Resources more than doubles loss to €243,000
10 How much does it cost to sell your house?
Real news has value SUBSCRIBE