Now we really know how big a hole it would take to fill the Albert Hall . . . 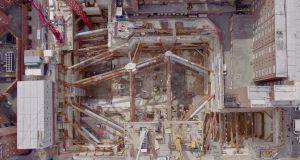 One of London’s largest ever excavations has been just completed with the help of Irish architects Scott Tallon Walker.

The job involved removing the equivalent of five storeys of earth – 80,000 cubic metres – to prepare the site for a cancer treatment centre at University College London Hospitals NHS Foundation Trust.

The hole, dug by excavator McGee to a depth of 28.5m in an area 87m long by 67m wide, is big enough to accommodate the Royal Albert Hall or 640 London buses.

It took 300 workers 16 months to remove the earth. Some 1,850 tons of steel are being used to prop up the soil on the sides. This is an important consideration, as the City of London site (the former Odeon Cinema) is exceptionally tight and just 10m from the Tube’s Northern Line.

There is continuous monitoring to ensure no disturbance to either site, especially as the lowest level of the hospital’s basement is at the same depth as the tube tunnel.

Excavated material had to be disposed of in accordance with Breeam (Building Research Establishment Environmental Assessment Method) standards. It was trucked out during the day; the earth was used to make a golf club in Oxfordshire, and boulder clay was made into bricks.

Some 25,000 cubic metres of concrete will be placed below ground for the hospital’s substructure. The depth was needed to house the hospital’s proton beam accelerator – the latest treatment in cancer radiotherapy – so that the machine gets to the required velocity to work its magic. Proton beam therapy is a form of radiotherapy used to treat cancer that can be targeted extremely precisely, causing minimal damage to surrounding tissue.

Above ground will be six floors, including Europe’s largest centre for the treatment of blood disorders. The entire structure will 57m high.

When the £260 million building opens in 2020, it will be the second such facility in the UK – a proton beam therapy centre is due to open at the Christie in Manchester next year. Together they will treat about 750 patients a year.

Proton beam therapy had been offered overseas to NHS patients since 2008 in a programme that has supported around 1,000 patients.

Scott Tallon Walker are architects and lead consultants on the project, which is headed by Bouygues UK, one of Britain’s leading construction companies. Some 3,000 workers will be involved in the construction overall.

“This may have been STW’s most challenging brief ever,” says chairman Eoin O’Morain, “removing earth equivalent to 640 London bus loads out of the centre of one the world’s busiest capitals. But the team effort has delivered and we’re looking forward to delivering the project on time and on budget, a core component of our contract.

“We’ve had a practice in London for well over four decades and we’ve recently been voted one of the top 10 healthcare practices in the UK,” he adds. “We’re also working on the remodelling, refurbishment and extension of two iconic buildings within the St Bartholomew’s Hospital site to provide a new cardiac-focused hospital for Nuffield Health.

“The two buildings make up an important classical frontage to Giltspur Street in the heart of City of London. Some of your readers may know the buildings better as a film location for the BBC TV series Sherlock.”