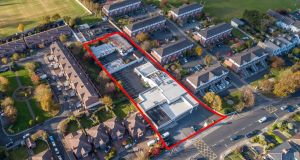 The Milltown site is zoned for residential use and located beside the existing Mount St Anne’s and Glenmalure Park estates.

Developers looking to take advantage of the appetite of institutional investors for well-located private rented sector (PRS) schemes in the capital may be interested in the sale of a prime residential development opportunity in Milltown, Dublin 6.

While the one-acre site served as the location for the former Murphy & Gunn BMW car dealership up until its closure in September 2018, it is zoned for residential use and has the potential to accommodate up to 67 apartments according to a feasibility study prepared for the vendors.

The property is being offered at a guide price of €6.5 million by joint agents Knight Frank and GVA Donal O’Buachalla, on behalf of Murphy & Gunn and the Jesuit Order respectively. The amount being sought represents a discount of €500,000 on the €7 million guide price which had been set when the site was first marketed in November 2018.

Located at the heart of Milltown, Dublin 6, the site benefits from 43 metres of frontage on to Milltown Road and comprises the former Murphy & Gunn motor dealership and adjoining former school buildings owned by the Jesuit Order.

The site is zoned Z1 Residential under the Dublin City Development Plan 2016-2022, the objective of which is “to protect, provide and improve residential amenities”.

According to the feasibility study prepared by Reddy Architecture, the site has the capacity to accommodate a development comprising 67 apartments over a basement car park, subject to planning permission. The scheme’s potential is enhanced by the success of two adjoining housing schemes, Mount St Anne’s and Glenmalure Park.

Milltown is an established and sought-after residential neighbourhood 2.5km from St Stephen’s Green. The site is well located within the area, and is close to the popular Wilde & Green cafe, the Dodder linear park, the shops at the Milltown Centre retail scheme, and the Milltown Luas green line stop.